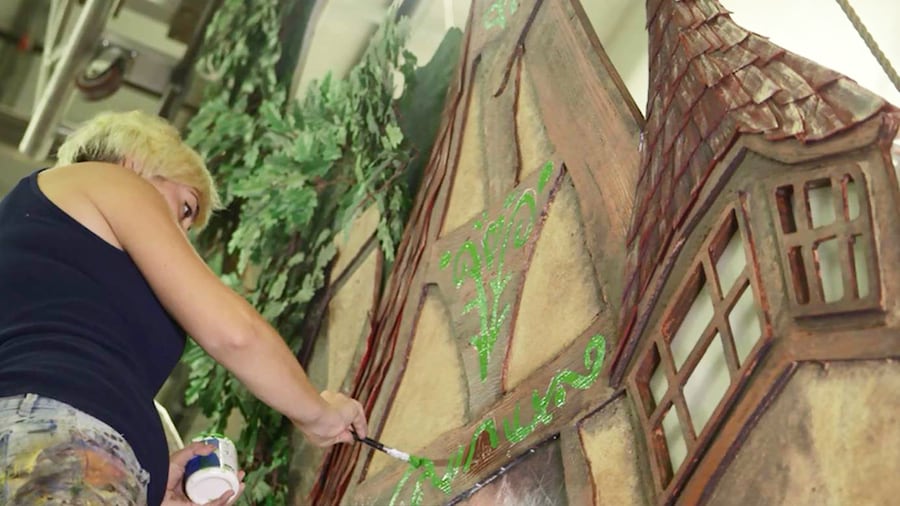 5 Things You Didn’t Know About ‘Tangled: The Musical’

Last week, we tested your “Tangled: The Musical” knowledge, and it looks like you’re just as excited as we are about the first-ever stage adaptation of “Tangled!” Before it debuts aboard the Disney Magic during her November 11 Bahamian cruise, we have a few more secrets to share with you about the musical’s production …

1. Legendary composer Alan Menken and lyricist Glenn Slater have always wanted to write more songs for “Tangled.” Alan and Glenn wished they had written more music for the animated film, so they were thrilled with the opportunity to come back to “Tangled” and write a new opening number, a song for Flynn Rider and lyrics for the festival scene.

2. The mural in Rapunzel’s tower set piece was designed by Claire Keane, who created the original mural design for the “Tangled” film. Claire Keane, daughter of legendary Disney animator Glen Keane, re-imagined her animated mural design into a life-sized painting for the set of “Tangled: The Musical.” 3. Every set piece for “Tangled: The Musical” was sculpted and painted by hand. Rapunzel would approve, don’t you think?

4. Rapunzel’s royal dress that appears in the show’s final scene is made of custom fabric developed especially for this show. Our Tony Award-winning costume designer, Paloma Young, wanted this piece to make a statement like only a Disney princess dress could. 5. Speaking of costume designer Paloma Young … Her ancestors were real-life Bavarian royalty! Paloma is the great-great-granddaughter of Charles Hoegerman of Bavarian nobility. Talk about inspiration!

For more inside looks at the creation of “Tangled: The Musical,” check out our behind-the-scenes series:

Likes (0)
Share 5 Things You Didn’t Know About ‘Tangled: The Musical’