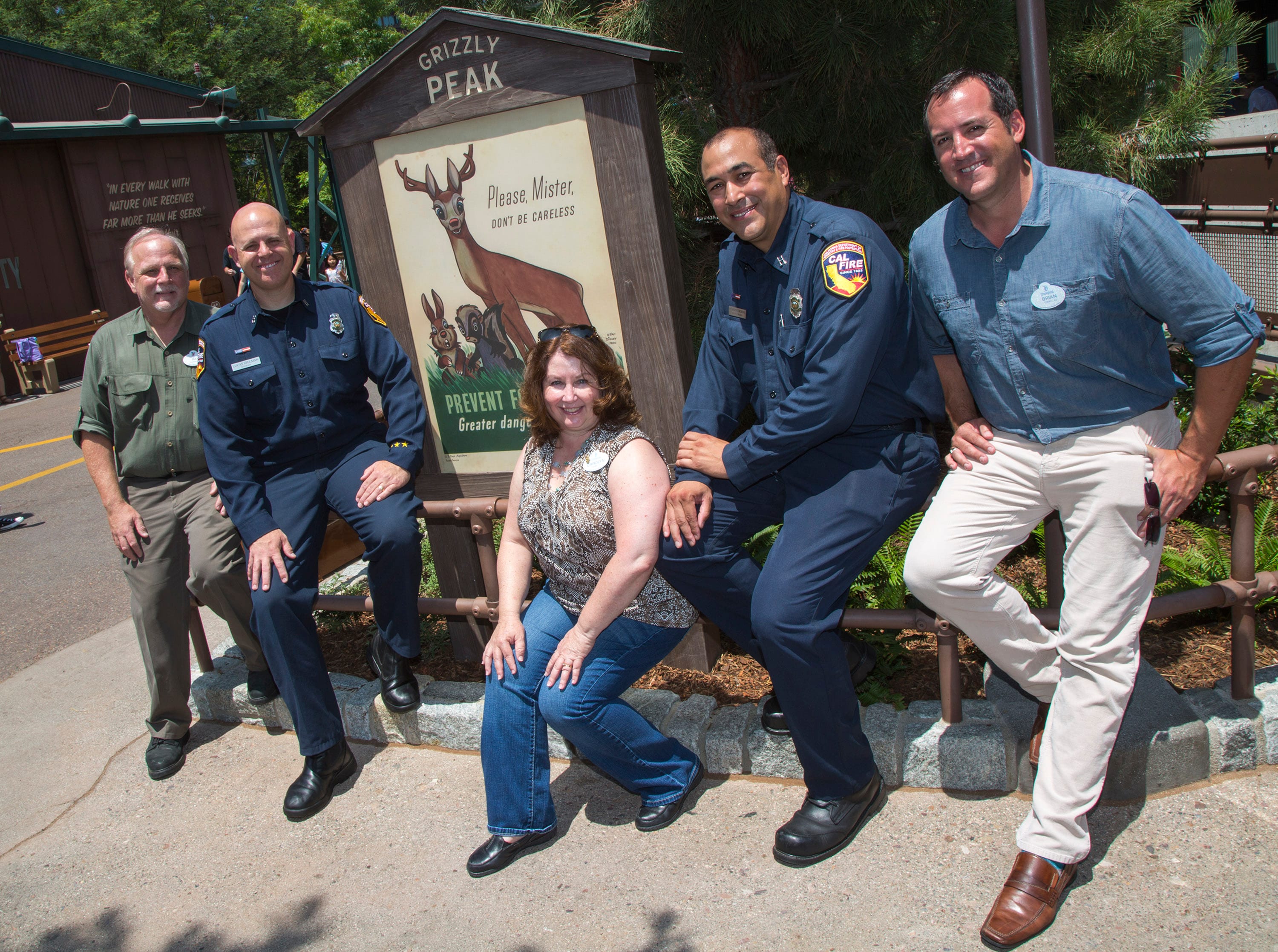 Grizzly Peak Airfield takes Disney California Adventure park guests into California’s High Sierras and tells the story of the brave men and women who fight wildfires in our California forests. To create the story of Grizzly Peak Airfield, Walt Disney Imagineering turned to the experts at CAL FIRE (California Department of Forestry and Fire Protection), even visiting Hemet-Ryan Airfield in California for research. Since this is Fire Prevention Week, I thought this would be the perfect time to share this story with you here on the Disney Parks Blog. 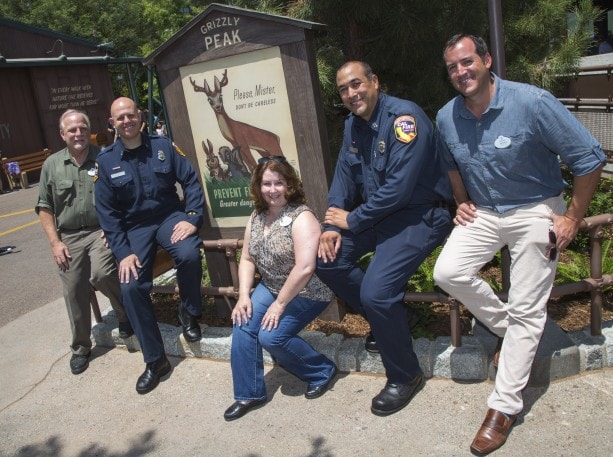 Soon after Grizzly Peak Airfield opened, two of the CAL FIRE officers who worked closely with Imagineers on the project – Captain Richard Cordova and Captain Lucas Spelman – visited the land with the Walt Disney Imagineering team they had inspired. They are pictured in the photo above with Ray Spencer, Brian Scholz and Carolyn Gardner – part of the creative team responsible for bringing the area to life. 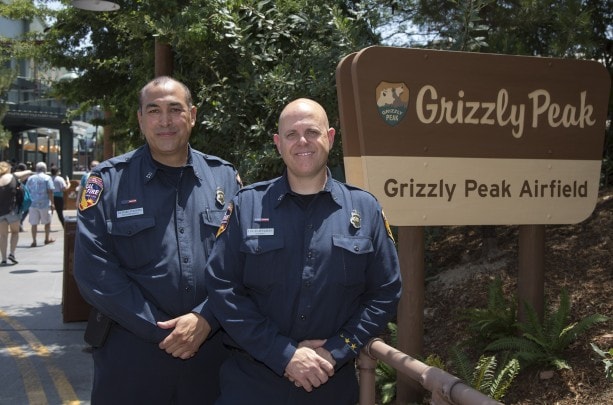 I recently had the chance to ask Captain Cordova and Captain Spelman about the experience of helping create a land at Disney California Adventure park.

What role did you play in helping Walt Disney Imagineering create the story of Grizzly Peak Airfield?

Captain Cordova: I shared my knowledge of the fire service from the 1950s-1960s – both ground attack and air attack. We gave them period-specific articles to display throughout the area, donated by our CAL FIRE museum, including old pictures and manuals from the ‘50s and ‘60s. Our biggest contribution has been the continued knowledge of CAL FIRE, United States Forest Service and other fire departments.

Captain Spelman: My role was to bring to life our knowledge and love for our career, bring forth our rich history and to evaluate Grizzly Peak Airfield as it related to our profession. Let me just say that this was an experience that truly was incredible.

What did you show the Imagineers on their research visit to Hemet-Ryan Airfield that made its way into the new land?

Captain Cordova: We gave them a tour of the airbase, sharing with them the history and showing them our aircraft: Airtankers S2-T, Airattack OV-10 Bronco and the Super Huey Helicopter. During the tour we got a fire dispatch, so they got to see the aircraft in action. We also had lunch at Bambi’s Café down the street, which is where the Imagineers got a lot of their ideas for Smokejumpers Grill.

Captain Spelman: I enjoy the Mt. Muir Lookout at Grizzly Peak Airfield. This was based on our traffic control tower, which was also a lookout tower before it was placed into service at CAL FIRE Ryan Air Attack Base. I also loved the gear lockers that were placed between Humphrey’s and the restrooms. This is where some of the items from our CAL FIRE museum were placed. I was just taken aback by the time put into every last item placed throughout the this beautiful area.

What is your favorite detail in Grizzly Peak Airfield?

Captain Cordova: Wow, that’s a hard question – it’s all amazing. It’s great how the Imagineers can take some information from a tour and from us and turn it into a land.

Captain Spelman: My favorite detail of this area has to be the flow from Grizzly River Run to Grizzly Peak Airfield, with Disney’s Grand Californian Hotel in the background. It brings me back to my childhood, when my family would travel to parks throughout the state. The trees, the park signs, the lighting all come together to really bring the experience back to me. 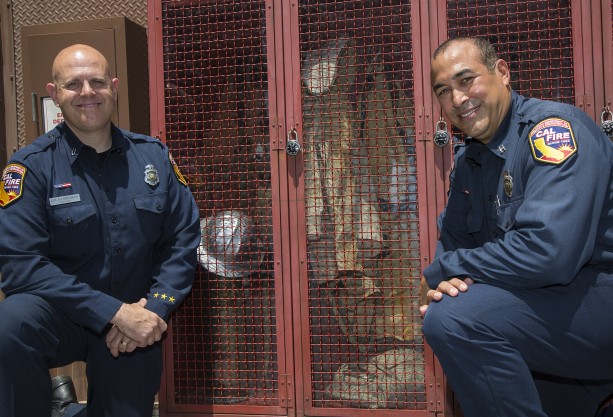 Which of your own personal items are inside the lockers at Grizzly Peak Airfield? How were they chosen?

Captain Cordova: The old fire equipment, axes, nozzles and Nomex. The best part is having my name in the locker.

Captain Spelman: The lockers will always have a special place in my heart. There are two brass firefighting nozzles that I had picked up from a local garage sale. One was what we call a “combination nozzle” and the other a “straight stream nozzle.” I was never sure what I was going to use them for, but I could tell they had done some firefighting and needed a good home. Well, when the Imagineers said they would like additional items from the fire department, I knew just the pieces to be considered for Grizzly Peak Airfield. Although there are many items from our CAL FIRE museum in these lockers, the two nozzles will always be personal for me. 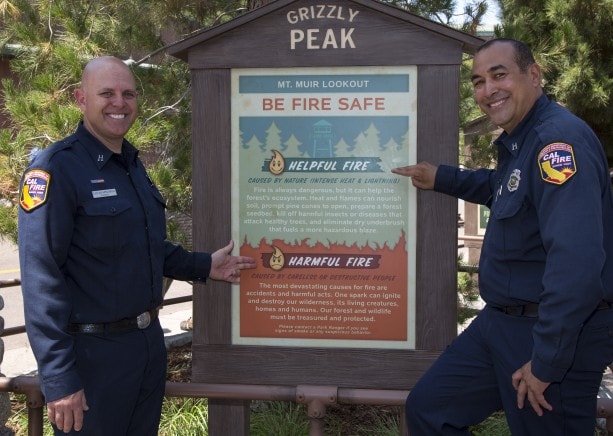 Captain Cordova: I can’t tell how much I love going to the parks with my family. It’s my getaway from everyday life. Now having a little part in Grizzly Peak makes it even more special for me. It’s nice that Disney has showcased our State Parks and the men and women of the fire service. It was an honor for me to work with the Imagineers.

Captain Spelman: My family and I have been Annual Passholders since 2003 and just love the Disney experience. Being involved with this project is a Disney fan’s dream come true. Grizzly Peak Airfield will always be a special place for me.