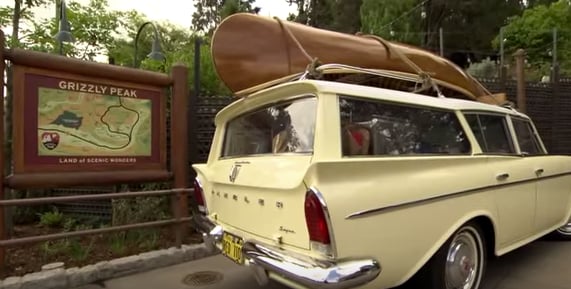 Grizzly Peak Airfield at Disney California Adventure park takes guests back to the road-trip days of the 1950s and ‘60s with unique locations like the recently opened Refreshment Point. Just outside of Humphrey’s Service & Supplies, this quick stop is the place to mix and match cold Coca-Cola products at Coke Freestyle machines, whose unique look is inspired by Coke machines from the 1950s. Reminiscent of classic roadside refreshment stops, the location includes a vintage car loaded with camping supplies and other authentic details. Take a look at the video below to learn more about this vehicle and get a peek at Imagineers rolling it into its new home.

Did you notice the license plate of the car reads “RED 110”? If you know the significance of these letters and numbers, leave your guesses in the comments and I’ll be back later with the answer!

UPDATE: Jennifer and Christopher are correct! “RED 110” is a tribute to Roy E. Disney, whose career began with the “True-Life Adventure” series, which was one of the inspirations for Grizzly Peak Airfield. Roy continued to be passionate about – and influential in – The Walt Disney Company’s commitment to preserving wildlife. And 110 is a reference to his birthday, January 10.