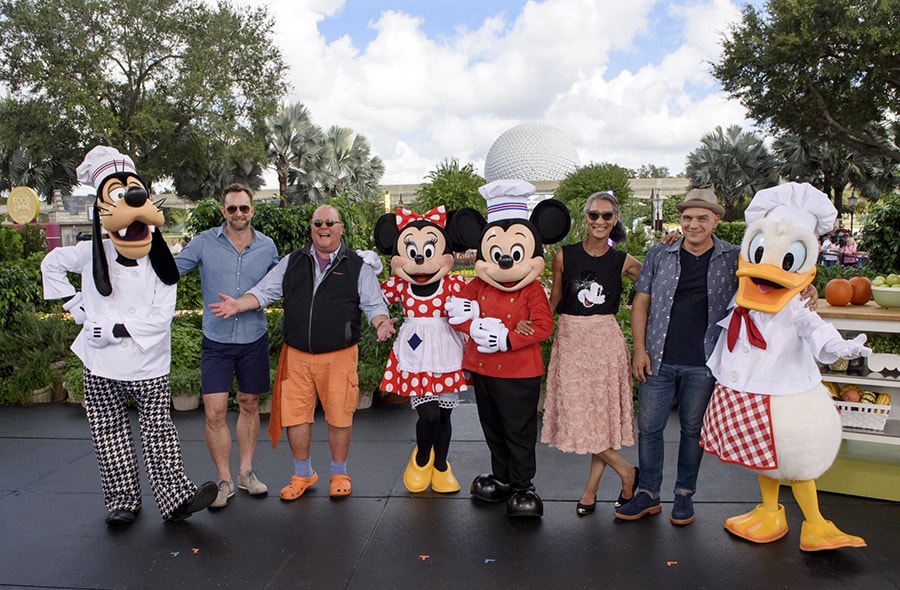 For the first time ever, ABC’s “The Chew” left their studios last week in New York City and took their daily “party in the kitchen” to the Epcot International Food & Wine Festival at Walt Disney World Resort to tape five shows airing this week (October 12-16) on ABC.

Hundreds of enthusiastic fans cheered on Clinton Kelly, Carla Hall, Mario Batali and Michael Symon on the custom-built set with the backdrop of Spaceship Earth under Florida’s sunny skies. We had a special performance from the cast of Disney’s “Festival of the Lion King” from Disney’s Animal Kingdom. They opened one of the shows (airing this Thursday) with a powerful dance – just one of the many “only-at-Disney-World” moments the foursome experienced during their weeklong stay.

Wonder what each of the hosts did just after arriving? Carla said she headed straight for Disney’s Animal Kingdom and Kilimanjaro Safaris. Clinton racked up a big score on Toy Story Mania!, while Mario took the plunge on the Twilight Zone Tower of Terror, both at Disney’s Hollywood Studios. And Michael took a leisurely boat ride through the hydroponic growing area at The Land pavilion in Epcot Future World.

As the Emmy-winning hosts created delicious treats on stage and showcased festival marketplace dishes, they also cooked up some fun with Mickey Mouse and Goofy for today’s show. On other episodes, they treated audiences to guest appearances by Iron Chef Morimoto, who just opened Morimoto Asia at Disney Springs; Alfonso Ribeiro (ABC’s “America’s Funniest Home Videos”) and Bellamy Young (ABC’s “Scandal”). They even stopped by for a nosh at the festival’s Rockin’ Burger Block Party, one of the 20th festival’s new premium dining events. Here’s a fun behind-the-scenes look at the production:

Tune in this week to ABC, Monday through Friday (1 p.m. Eastern, noon Central and Pacific) for lots of Walt Disney World fun!