Halloween is only a few days away, and I want to share some fun Halloween tales (and tails!) with you from Disney’s Animal Kingdom about the Malayan flying foxes, Okapis and Baobab trees.

True or False: Bats will suck your blood.

False! Malayan flying foxes, the fruit bats at Disney’s Animal Kingdom, will not suck your blood. Flying foxes enjoy fruits and vegetables, and the ones at Disney’s Animal Kingdom love watermelon, papaya and figs. Since flying foxes love these foods, they play a very important role as seed distributers in the wild. They’ll chew their food and spit out remaining seeds as they fly. This helps the eco-system by sometimes introducing plants to new locations.

Bats also have a bad reputation for being blind, or having bad eyesight. This couldn’t be more wrong! Although some bats use echolocation, flying foxes don’t. Their eyesight is almost three times better than humans, and they can see in color. Originally from Southeast Asia, flying foxes face habitat destruction, hunting and are susceptible to extreme heat. They don’t have sweat glands, which means they need moisture, or water, to help cool themselves down.

True or False: Okapis are the ghosts of the forest.

True! Okapis are originally from the Congo and weren’t discovered until the 1900s. This is probably because they live solitary lives in very dense forests, and hence the ghost name. Living in the forest has also allowed okapis to develop amazing hearing that they rely on to listen for predators or movement.

Most people assume that okapis are related to zebras because of the pattern on their behind, but they are actually the only relative of giraffe. This disruptive coloring evolved to mimic light coming through trees to better camouflage okapi from predators in the wild.

Okapis are considered endangered because of its rapid population decline over the past two decades. They are hunted as bushmeat, face habitat loss and are ensnared in traps meant for other animals.

False! Although the trees look like they are upside down, and possibly dead, they are very much alive. Baobab trees help support eco-systems by acting as a home and food for animals and food for humans. Baobabs can provide shelter for animals like snakes, bats and bees to name a few.

Baobab trees have the ability to store large volumes of water, which is especially helpful during drought seasons. However, animals like elephants and eland often chew on the tree bark to hydrate. Unfortunately, this ultimately harms the trees.

Both animals and humans like to eat the Baobab fruit and seedpods. The fruit has twice as much calcium as milk, is high in anti-oxidants, iron and potassium, and has six times the vitamin C of an orange. The seeds also produce edible oil. In some parts of Africa, the baobab is called the “tree of life.” Sound familiar? The Tree of Life at Disney’s Animal Kingdom is, in fact, a baobab tree. 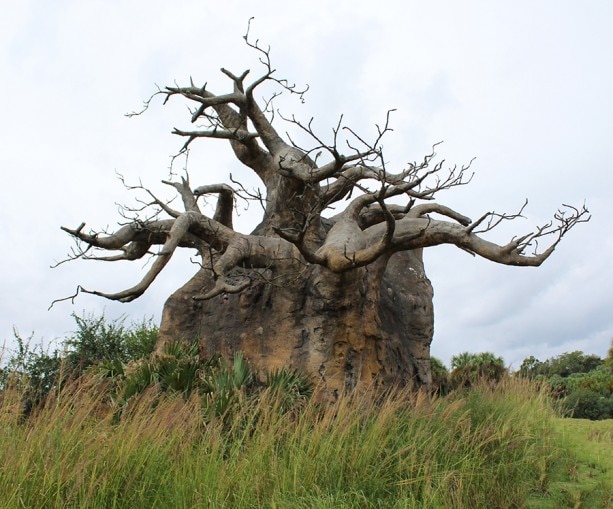 Baobabs suffer from being waterlogged, drought, black fungus and, as already mentioned, animals eating the bark. These as well as habitat invasion, hurt the baobabs and have motivated researchers to start studying the livelihood of the species.

Happy Halloween from everyone at Disney’s Animals, Science and Environment! What other animal tales have you heard? Let us know in the comment section below!