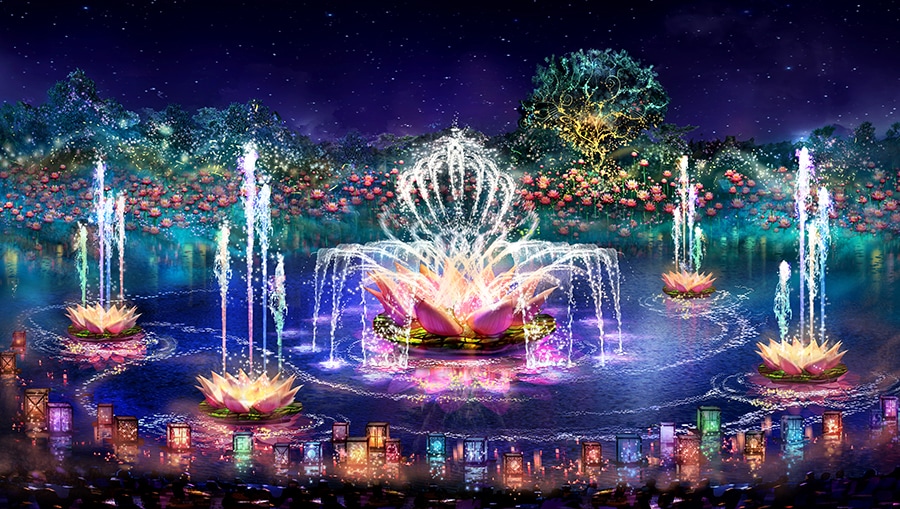 This week, we had some exciting updates to share on what’s coming to Disney’s Animal Kingdom in 2016, including a first look at some of the amazing sights you’ll experience during our new nighttime experience “Rivers of Light” and a first look the new Tiffins restaurant.

“Rivers of Light” will take place on Discovery River between Discovery Island and Expedition Everest and be one of the most memorable and emotionally stirring shows in the park’s history. To create “Rivers of Light,” Imagineers and Creative Entertainment partnered with the talents of master puppet designer Michael Curry, composer Mark Mancina and the filmmakers at Disneynature. Visit our original story to see how we’re bring the show to life.

And Tiffins restaurant will celebrate the art of traveling, featuring a diverse menu drawing from places that inspired the creation of Disney’s Animal Kingdom. Open for both lunch and dinner, Tiffins will also include waterfront views from comfortable indoor and outdoor seating areas.

Download Our Happy Birthday Mickey Wallpaper – Mickey Mouse made his on-screen debut in the animated short, “Steamboat Willie,” in 1928. In honor of our favorite mouse’s birthday, Disney artist Leo Cardoso developed this brand new desktop/digital wallpaper for us to share with all of you.

Digging Up Merchandise at Disney Parks for Disney•Pixar’s ‘The Good Dinosaur’ – This week, we are celebrating “Dino Week” in honor of the upcoming release of Disney-Pixar’s “The Good Dinosaur” which arrives in theaters on November 25.

Top 10 Holiday Entertainment Highlights at Disneyland Resort – It’s beginning to look a lot like Christmas at the Disneyland Resort, where we’re making the holiday season merry and bright, now through January 6, 2016.

New Dining Experiences Coming to River Belle Terrace and Rancho del Zocalo Restaurante at Disneyland Park – If you’re visiting Disneyland park this February, you might want to try one of two new dining experiences. Click through for details!