Earlier this fall, our first pedestrian bridge opened near Team Disney. Yesterday, we celebrated the official debut of the second bridge, linking Hotel Plaza Boulevard to Disney Springs Marketplace more safely and efficiently than ever before.

Along with several fellow cast members, one of our Walt Disney World Resort ambassadors, a handful of Disney executives, and partners from Reedy Creek and Hotel Plaza Boulevard, I had the chance to witness the ribbon-cutting moment that marked yet another milestone in the evolution of Disney Springs.

With a giant pair of golden scissors, confetti streamers, musical fanfare and celebratory cupcakes, we debuted the bridge in true Disney Springs style! 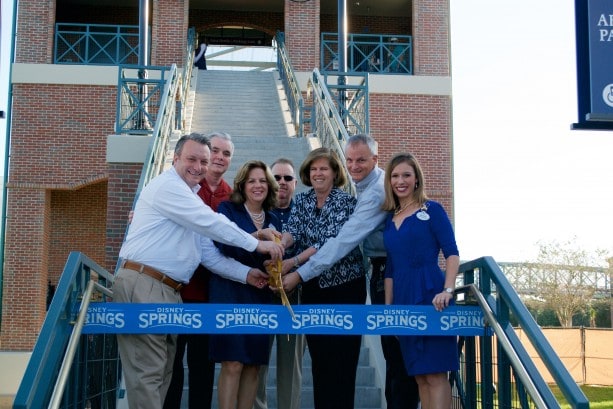 Whether you’re staying at one of the Disney Springs Resort Area Hotels located on Hotel Plaza Boulevard or simply parking in the lots near Team Disney for a few hours, I’d encourage you to take a walk across one of these bridges. (It’s surprisingly cool and calm up there, and the views are fantastic!)

With expansion efforts continuing through summer 2016, there’s still more change on the horizon. Now, thanks to our pedestrian bridges, that horizon looks markedly different – literally! For the latest Disney Springs news, follow @DisneySprings on Twitter and our recently-launched Instagram account. We’d love to see a photo of you enjoying our property; use hashtag “#DisneySprings” for your chance to be featured!