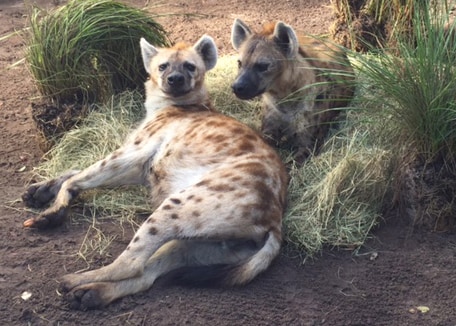 We are proud to share that two spotted hyenas have been introduced to the Kilimanjaro Safaris savanna at Disney’s Animal Kingdom! The hyenas were first introduced to the savanna last week and appear to enjoy their new home.

Because the area is so new to the duo, they have only been out for short periods of time so far. Their time on the savanna will increase as the days go by.

If you watched Disney’s The Lion King, you will remember the villainous hyenas. The hyenas were the bullies of the savanna, often confronting Simba and his friends.

In reality, hyenas are an incredibly interesting and powerful species, and I can guarantee you they are not all villains. 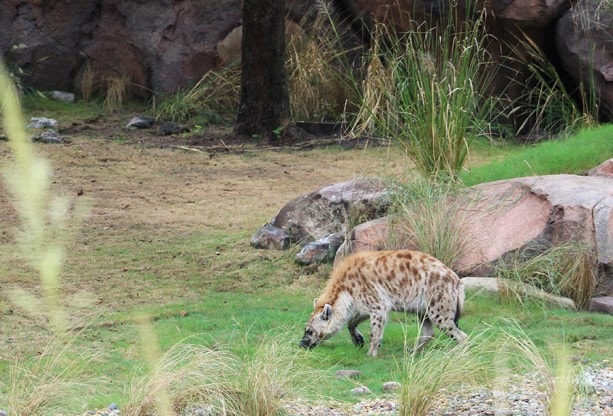 Groups of Hyenas are referred to as clans. The clans sometimes come together to hunt and defend their territory, but most activities are done solo or in small groups. In the wild, they hunt their own food and – contrary to public opinion – do not often scavenge another animal’s meal.

The ranking of hyenas’ social structure and clans are also very important to a hyena’s way of life. Females are the leaders of the clans, with the lowest-ranking female ranking above the highest-ranking male. The low-ranking males will often be found on the outskirts of the clan and only participate in hunting or fights. Although hyenas are doing better than many species in the wild, because of their wide range and large population, they are still facing a population decline. Loss of habitat is a significant threat, as well as local communities treating them as pests and hunters poaching them.

By having hyenas at Disney’s Animal Kingdom, we hope to show our Guests that the misconceptions about this species are not true. These animals deserve our consideration, and I’m confident you will enjoy learning more about them.

Visit DisneyAnimals.com to learn more about some of the animals at the Walt Disney World Resort.