We recently shared plans for a new “Disney & Pixar Short Film Festival” experience to open in Future World at Epcot, and we’re happy to announce that this new offering will officially open its doors today. 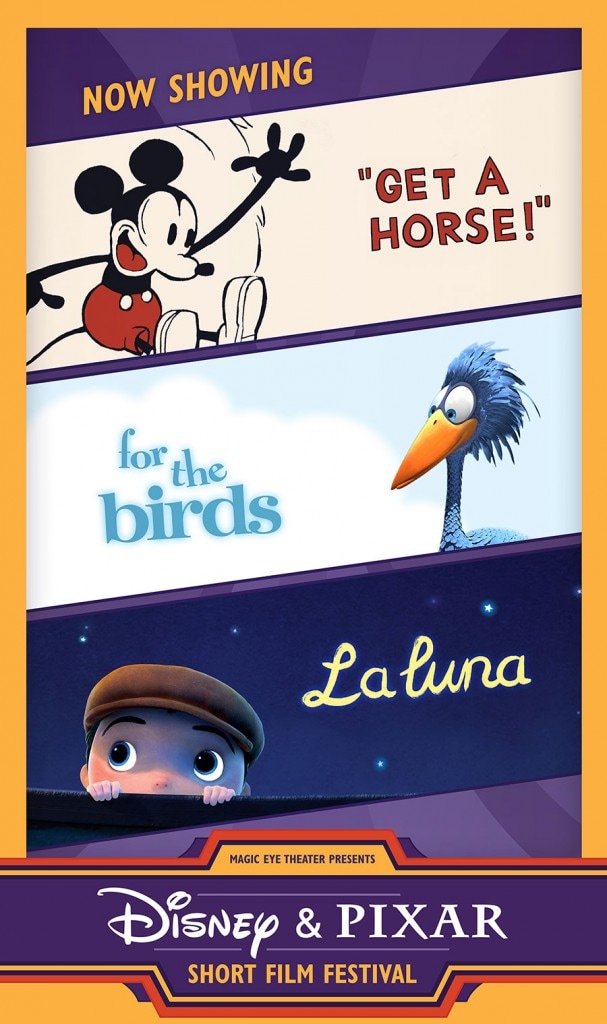 This new experience will feature a look into the visionary minds behind some of the world’s most iconic animated films today. Once inside the theater, guests can put on their 3D glasses and enter the imaginative worlds of three animated shorts – “Get A Horse,” “For The Birds” and “La Luna” – which will burst to life on the big screen (and in the theater) like never before.

“Get a Horse” stars Mickey Mouse and features Walt Disney himself as the voice of the iconic character. This black-and-white, hand-drawn short follows Mickey, his favorite gal pal Minnie Mouse and their friends Horace Horsecollar and Clarabelle Cow as they delight in a musical wagon ride — until Peg-Leg Pete shows up and tries to run them off the road.

“For The Birds” opens to show one by one, a flock of small birds perch on a telephone wire. Sitting close together has problems enough, and then along comes a large dopey bird that tries to join them. The birds of a feather can’t help but make fun of him—and their clique mentality proves embarrassing in the end.

And lastly, “La Luna” is the timeless fable of a young boy coming of age in the most peculiar circumstances. Tonight is the very first time his Papa and Grandpa are taking him to work. In an old wooden boat they row far out to sea, and with no land in sight, they stop and wait. A big surprise awaits the little boy as he discovers his family’s most unusual line of work. Should he follow the example of his Papa or his Grandpa? Will he be able to find his own way amidst their conflicting opinions and timeworn traditions?