Today Disney Chairman and CEO Bob Iger presided over a special ceremony to dedicate the newly restored office of Walt Disney in the Animation Building at the Walt Disney Studios lot in Burbank. Disney Parks guests have been able to see selections from Walt’s office suite over the years at One Man’s Dream at Disney’s Hollywood Studios and inside the Main Street Opera House at Disneyland park, but the Walt Disney Archives painstakingly restored the suite—down to the smallest details—including original furnishings, his piano (frequently played back in the day by Disney Legend Richard Sherman), awards, and some items from his collection of miniatures. 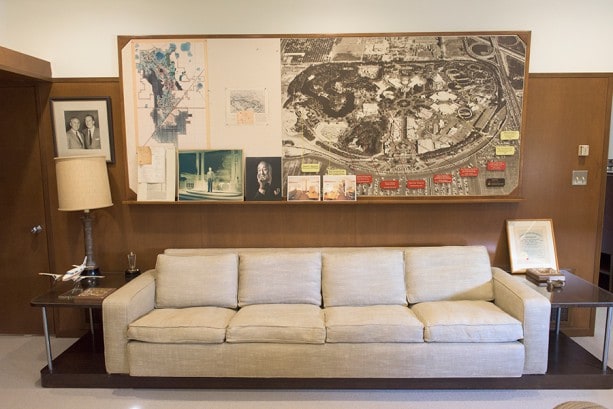 Park fans will love the large map, hanging over the couch in his working office, of Disneyland as it existed in 1966, including recent additions to the park as well as those yet-to-be-constructed including Haunted Mansion and New Orleans Square. There’s one of the first master plans for what would become Walt Disney World Resort—including his vision for EPCOT. The office also features a golden cage containing a brightly colored tiny, singing robotic bird, which served as inspiration for the Audio-Animatronics we know today.

In 2016, the office will be featured on select D23 Member tours. Keep your eyes here for more opportunities to see this incredible permanent exhibit.