We introduced painted dogs to the Kilimanjaro Safaris savanna earlier this week at Disney’s Animal Kingdom! Everyone in Animals, Science and Environment is thrilled to have this unique species join the family.

The name “painted dog” originates from their scientific name Lycaon pictus, which means “painted wolf-like animal” in Greek and Latin. Painted dogs, also known as African wild dogs, are known for their large round ears (They look a lot like Mickey Mouse ears!) and multi-colored fur coats. Each individual dog has unique paint-like splotches on their coat that are similar in their distinctiveness to a human fingerprint. Most also have bushy white-tipped tails. Painted dogs are fascinating in their social behaviors. They operate as a family unit with all members of the pack caring for each other. They will even share food with ailing members of their pack or nursing mothers. The entire pack cares for pups after they are born. Both males and females will stay back with them as “babysitters” during hunting excursions.

When you’re on the Kilimanjaro Safaris savanna, I hope you can catch one of their elaborate greeting ceremonies. Each dog tries to interact with every other dog in the pack each time they wake up or return to the pack. Their yips and squeals are vocalizations that are unique to each dog and help others identify them. 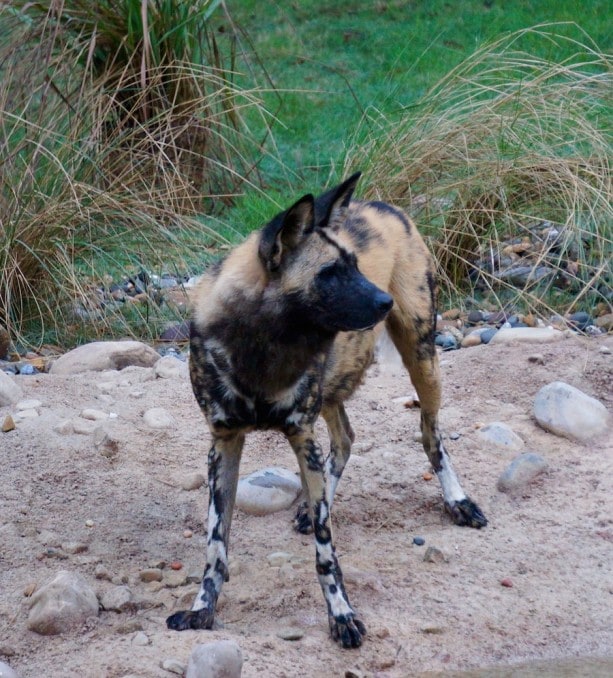 The painted dogs and hyenas will share the same spot of the savanna, but at different times of the day and evening. As always, guests will experience a different safari every time they ride.
Learn more about some of the animals you can visit at Disney’s Animal Kingdom at DisneyAnimals.com.