This week, we continued our popular “All in the Details” series with an exclusive story on how Walt Disney Imagineering is putting the “springs” into Disney Springs at the Walt Disney World Resort.

At the heart of Disney Springs is a bubbling spring located in Town Center that represents not only the power and beauty of nature, but optimism and possibilities. To recreate an authentic Florida spring, Imagineers used various shades of bright glass pieces as accent colors to make the springs glitter and nearby live oak and cypress trees were incorporated into the design. Check out Jennifer’s original story for more details. 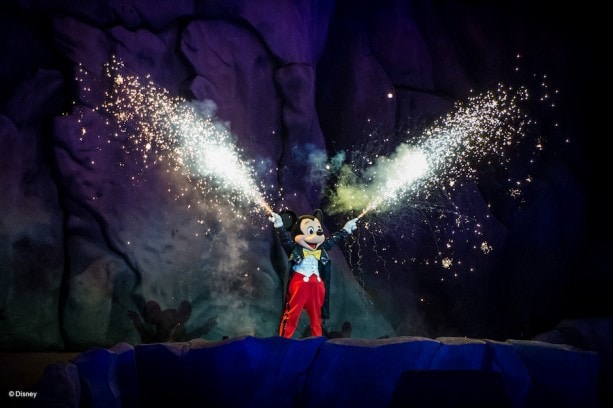 We also announced our next Disney Parks Blog hosted live stream will be Fantasmic! at Disney’s Hollywood Studios on February 2.

The live stream will start promptly at 6:50 p.m. EST, but join us early at 6:45 p.m. for a behind-the-scenes look at the show. To watch, simply visit the Disney Parks Blog around 6:45 p.m. on February 2. You can also engage with us by using the hashtag #DisneyParksLIVE on Twitter.

Here are some other stories we worked on this week.

Look Back at the Making of the Disneyland Resort Diamond Celebration Rose Parade Float – Weeks before the finishing touches were added, we went to the warehouse and captured the 166-foot-long Rose Parade float just as it was taking shape.

runDisney Tinker Bell Half Marathon Weekend Presented by PANDORA Jewelry Medals – Runners are gearing up to put their fairy wings on and fly to the finish line to earn this year’s runDisney Tinker Bell Half Marathon Weekend bling. The Disney fairies, Peter Pan and the Lost Boys will be there to celebrate the fifth anniversary of the event weekend. Check out these medals inspired by our friends from Pixie Hollow. – See more at: https://disneyparks.disney.go.com/blog/2016/01/rundisney-tinker-bell-half-marathon-weekend-presented-by-pandora-jewelry-medals/#sthash.BspsmqHi.dpuf

QUIZ: How Well Do You Know Walt Disney’s Carousel of Progress? – Is Walt Disney’s Carousel of Progress one of your favorite classic Disney attractions? How well do you know it and its history? Put your knowledge to the test below! – See more at: https://disneyparks.disney.go.com/blog/2016/01/quiz-how-well-do-you-know-walt-disneys-carousel-of-progress/#sthash.B5mdplOy.dpuf