The Disneyland Resort Diamond Celebration continues! On January 14, bring home the next piece in the “Decades” collection, depicting 1985 to 1994. 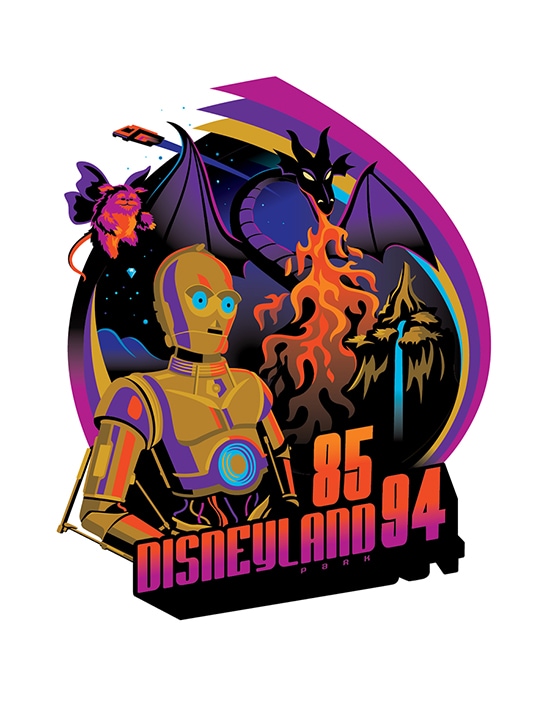 I’m probably not the only one having flashbacks right now, mostly of the late 80s, early 90s style, but here are a few other things you may remember that happened during that time frame at the Disneyland Resort.

I know some of you spent time at the high-tech (for its time) Videopolis! Don’t deny it. During this time, it was also the 30th and 35th anniversary of Disneyland park; a certain intergalactic musical adventure debuted in the Magic Eye theater in Tomorrowland; Star Tours launched us into a galaxy far, far away; we found our laughing place inside Splash Mountain, changes were underway at the Disneyland Hotel; nighttime spectacular “Fantasmic!” gave us our first look into Mickey Mouse’s imagination; Mickey’s Toontown came to life. That, my fellow Disney fans, is just the tip of the iceberg, as I’m sure you know.

To commemorate this special time in Disney Parks history, the art designed by local southern California artist Jeff Granito will appear on a t-shirt, mug, plate, pin and print. Look for the new “Decades” collection at select locations throughout the Disneyland Resort including:

Tip: Have you already pressed a penny with this art at World of Disney Store? If not, put it on your list of things to do on your next visit.