Tween favorite Peyton List, star of “Bunk’d” on the Disney Channel, adores Walt Disney World Resort! Just a few weeks ago, she came to visit with her mom, dad and brothers and she shared some of her favorite things to do while at Walt Disney World Resort. First on the list … go shopping at a Disney retail shop to find Minnie Mouse ears to match her outfit. A girl can’t be too coordinated! 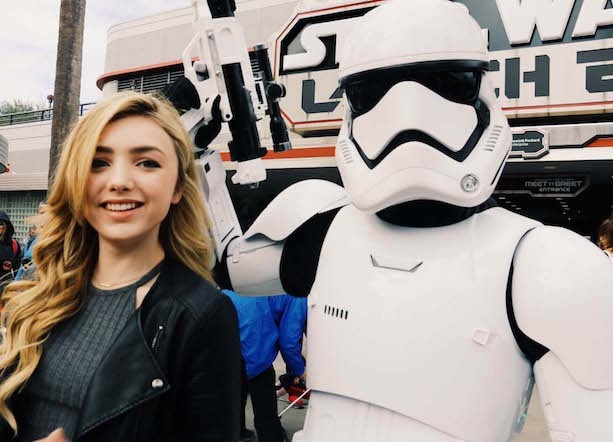 Then, it’s time for an encounter at the new Star Wars Launch Bay at Disney’s Hollywood Studios where she shares a smooch with Chewbacca on the Light Side. She also found some First Order Storm Troopers for a photo opp.

Peyton claims she’s a “daredevil” and tries to ride all of the roller coasters and wild rides in all four theme parks. There’s certainly many to choose from … including Rock ‘n’ Roller Coaster at Disney’s Hollywood Studios, Expedition Everest at Disney’s Animal Kingdom and Test Track at Epcot.

When hunger strikes, it’s time to snack on a soft serve pineapple Dole Whip from Adventureland in Magic Kingdom Park. It hits the spot for her every time and she says she can’t visit Walt Disney World Resort without indulging in the creamy, sweet treat!

After all the thrills and adventures, Peyton ends her Disney day with “Wishes” nighttime spectacular at Magic Kingdom Park. With all those dazzling and brilliant fireworks bursting above and around Cinderella Castle, it’s just the perfect kiss goodnight!

I bet your older child would agree … Walt Disney World Resort is still the place to be!

For more information on planning a trip to Walt Disney World Resort with your tween, check out www.disneyworld.com/Tweens.