The high school choir from Pennsylvania was at Walt Disney World Resort recently taking part in Disney Performing Arts at Disney’s Saratoga Springs Resort when they got a surprise visitor. Acclaimed beatboxer Kevin “K.O.” Olusola, from the Grammy-winning vocal group Pentatonix, dropped in on the unsuspecting students, giving them an especially “upbeat” musical experience.

Greeted by smiles and cheers of excitement, Olusola joined the Disney Performing Arts students as they took part in “Disney Sings,” a musical workshop that gives students the opportunity to work with a professional Disney vocalist and record a favorite Disney song. In addition to sharing his incredible beatboxing talent, Olusola offered helpful advice from his experiences as a musician and member of Pentatonix. 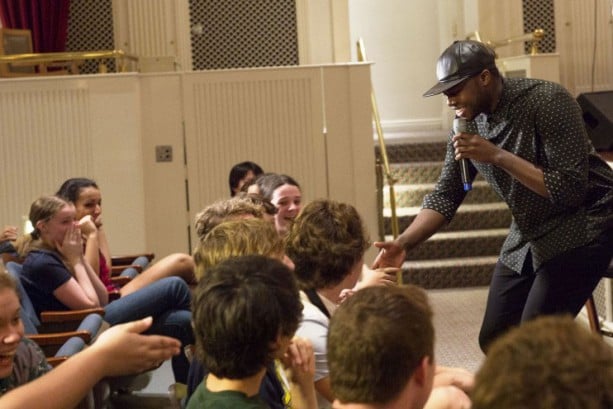 Winners of Season 3 of the television singing competition “The Sing-Off,” the platinum-selling recording ensemble Pentatonix has sold more than two million albums in the U.S. and received over 905 million views on their YouTube channel. The group received its first Grammy Award in February 2015 for Best Arrangement, Instrumental and A Cappella.