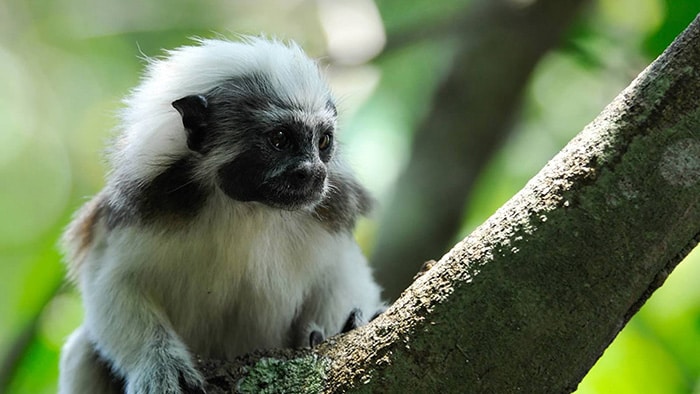 This Chinese New Year, we’re celebrating the Year of the Monkey! It is said that people born this year are smart, playful, social and curious, just like monkeys! At Walt Disney World Resort, we find monkeys engaging and exciting for many of the same reasons. Just think of some of our favorite monkey characters, such as Abu in “Aladdin” and Rafiki in “The Lion King!”

Monkeys are fascinating animals, and they are in need of our help as many of these species are in trouble. The Walt Disney Company supports monkey conservation around the world throughout the year, and Disney’s Animal, Science and Environment team members lend their expertise to protect these amazing monkeys, whether it is the Year of the Monkey, Sheep, Rooster or Dog.

Proyecto Tití, a conservation organization in Colombia, has received grants from The Walt Disney Company for nearly 20 years. My team works with the team in the field to help protect cotton-top tamarins, a squirrel-sized monkey known for its unique puffy white hairstyle. Threatened by habitat loss and illegal pet trade, Proyecto Tití focuses on ways to build pride in local communities to protect these monkeys that are found only in Colombia.

We help communities care for cotton-tops though education programs that inspire children to protect these primates by not having them as pets and have established recycling cooperatives that provide a small income for communities. You can help by purchasing an eco-mochila tote bag made by local artisans from recycled plastic bags. These are sold at Disney’s Animal Kingdom and Disney’s Animal Kingdom Lodge.

Save the Golden Lion Tamarin, and their Brazilian sister organization Associação Mico-Leão-Dourado, are organizations supporting the species’ conservation in its native habitat in Rio de Janeiro state, Brazil. Over the last 30 years, their work reforesting, eliminating illegal pet trade and reintroducing zoo animals into natural habitats, has helped the wild population grow from 150 to 3,200 golden lion tamarins. Challenges still remain to connect isolated populations through forest corridors and to develop actions for long term threats against the species.

The Disney Conservation Fund helps support monkeys’ close relatives, including gorillas and chimpanzees. Working with the Jane Goodall Institute, we sponsor and support the Gorilla Rehabilitation and Conservation Education (GRACE) Center, which rehabilitates orphaned Grauer’s gorillas in Democratic Republic of Congo, with medical supplies and veterinary expertise. Through community education, we hope to reduce the number of great apes orphaned from poaching and protect the wild population.

To celebrate the Year of the Monkey, visit Disney’s Animal Kingdom to meet these curious and intelligent animals, learn more about endangered monkeys and support the Disney Conservation Fund. At the park, you will find white-cheeked gibbons and siamangs in Asia, colobus monkeys on the Pangani Forest Exploration Trail and mandrills on the Kilimanjaro Safaris, both located in Africa. Lots of luck to you and our monkey friends this new year!