I’m delighted to tell you a story of excellent animal care, creativity, collaboration … and a mask.

Last summer, Zelda, an okapi at Disney’s Animal Kingdom Lodge, injured an ossicone, one of the protruding bones on an okapi’s head that resemble small horns.

Animal keepers noticed Zelda’s injury wasn’t healing because she was constantly licking the area. (Yes, an okapi’s tongue can reach to the top of its head!) To keep Zelda from licking the wound, the keepers tried a horse fly mask, developed to keep flies out of a horse’s eyes.

Even then, Zelda’s licking continued through the mesh mask. Although antibiotics would have healed her quickly, Zelda was pregnant, and our animal care team didn’t want to take any chances. Two keepers, Mori and Ashley worked closely with Zelda and they decided to get creative by reaching out to the Disney’s Animal Kingdom Costuming Department for help. 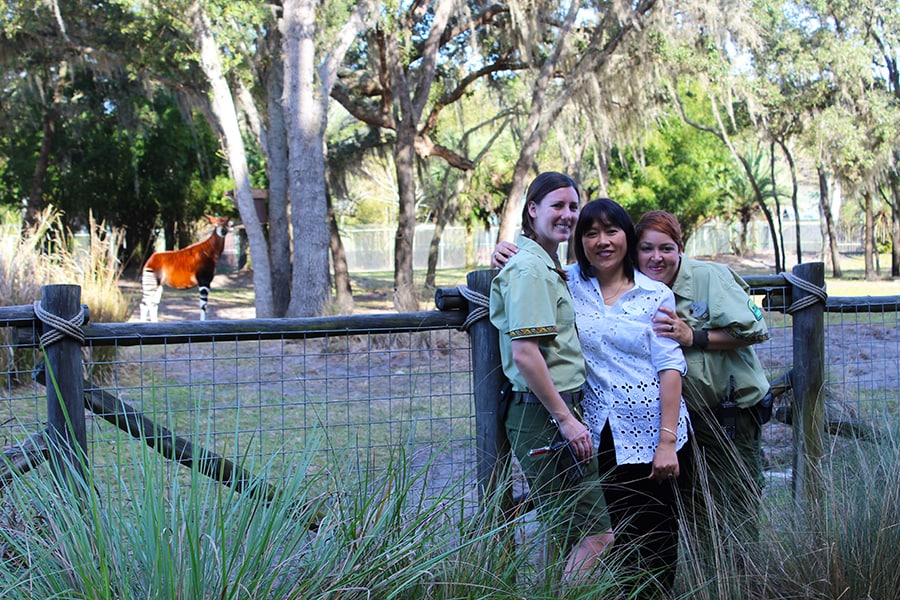 Costuming cast member Elaine met Zelda and started brainstorming ideas. She used a mixture of three soft and stretchy materials to make a few masks that would be comfortable, protect Zelda’s head and keep out the Florida heat.

Thanks to this creative collaboration and dedication between teams, Zelda’s ossicone is fully healed, and she gave birth to a healthy boy named Armando in December.

Naturally shy and reclusive, okapi are endangered and face a decline in population because of human interference and human population growth. Okapi originate from the Democratic Republic of the Congo and face threats such as commercial logging, coal mining and being poached for their meat and hide.