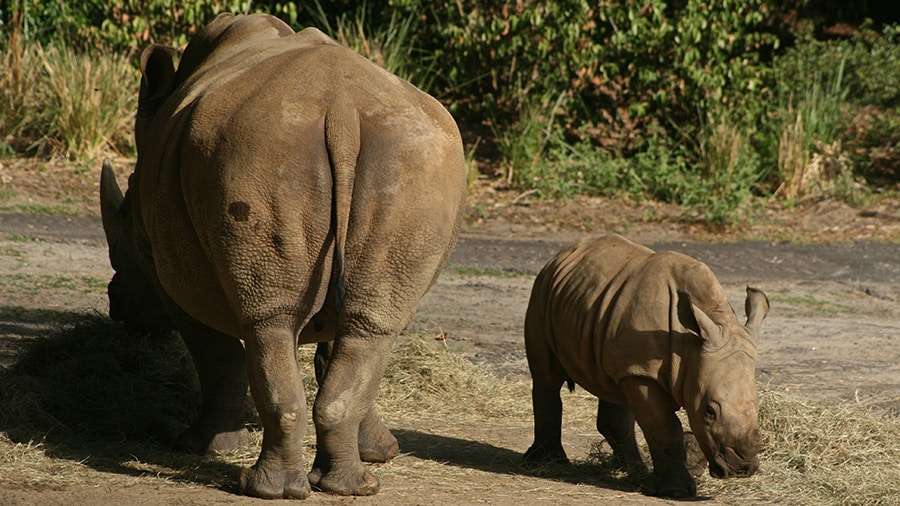 Wildlife Wednesday: ‘Princess’ of the Savanna Turns One

Last month marked the first birthday of our beloved white rhino Kiama, who you can often see on the Kilimanjaro Safaris savanna. Many of you, our Wildlife Wednesday readers, voted to name her Kiama shortly after she was born.

Today, some of our keepers jokingly refer to Kiama as the princess of the savanna. That’s because Kiama’s mom Kendi is the most dominant rhino on the savanna, and all the other rhinos know better than to mess with her daughter! Kiama gets away with behavior others might not, such as head-butting other rhinos as they are resting, exuberant romping and lying down on top of the rhinos’ hay (their meal!) to snooze.

Although she’s still a young rhino, Kiama weighed in at about 1,350 pounds during her one-year checkup with our veterinarians. That’s nearly 10 times what she weighed at birth, but just 25 percent of what she will weigh as an adult! She has the build of a bulldozer and the temperament of a puppy.

Kiama eats about 3.5 kilograms of timothy hay each day, which is nearly 8 pounds. Our Animal Nutrition Center Cast Members also prepare nutrient-rich meals specifically for her. On the savanna, she often grazes on grasses or hay with Kendi. You can identify Kendi by her beautifully long horn that curves upward. Rhino horns are made of keratin, the same as your hair and fingernails. Some mistakenly believe the horns have healing power, which has made them valuable on the black market. In South Africa alone, poachers kill three or more rhinos each day. In the wild, white rhinos are considered semi-social. Females typically live in pairs – just mom and her most recent offspring. Because of the vast space we have on our savannah, we can manage multiple rhino pairings successfully, and they coexist in loose associations with each other.

As Kiama grows, she is becoming more independent and confident. You might see her leave her mom’s side to romp around and play a game of sparring with Harmon, her young half-brother, or chase some of the other animals that live on the savanna, particularly bontebok, ostrich and zebra. The next time you visit, be sure to keep an eye out for Kiama, Kendi and the other rhinos wallowing in the mud, grazing or resting comfortably … unless Kiama starts head butting again.

Likes (2)
Share Wildlife Wednesday: ‘Princess’ of the Savanna Turns One