When guests depart for their flight around the globe on Soarin’ Around the World at Disney California Adventure park, the journey will be made possible by a special group of aviation enthusiasts. Let’s meet the California Aviators – a group of flying enthusiasts dedicated to preserving and sharing the history of flight.

Grizzly Peak Airfield is a scenic mountain airstrip, home to courageous aerial firefighters who protect the wilderness and its creatures. The story of this area tells us that pioneering pilots flocked to the airfield, drawn to the challenge of learning to fly near and over California’s Sierra Nevadas. Mountain elevations and erratic weather conditions became a proving ground for these courageous pilots, as well as a stimulus for creating improvements in aerodynamics and aircraft design. 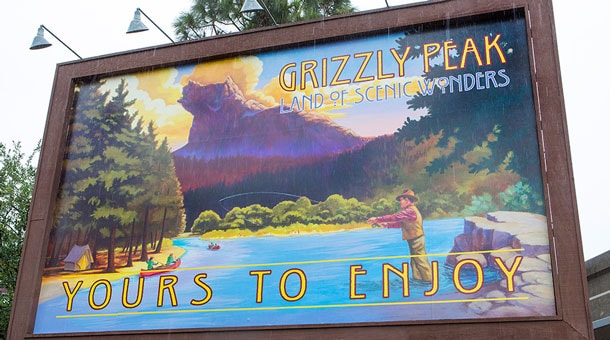 Today, pilots continue to enjoy the challenge of flying in and around the majestic beauty of Grizzly Peak. The old hangar has become home to a new generation of fliers and aviation enthusiasts – some of whom have formed an organization and called the California Aviators. This group of dedicated aviators has developed a sort of flying theater – a hang-gliding simulator that brings the exhilarating experience of flying to all visitors.

Just as Grizzly Peak Airfield serves as a welcome center for California’s Sierra Nevadas, Soarin’ is the gateway to the thrills and wonders of flight. It celebrates man’s continuing search for freedom and exploration, which brings an even greater appreciation of nature’s grandeur.

Join us as we take flight to new destinations when Soarin’ Around the World opens June 17. And don’t miss your chance to experience the original Soarin’ Over California, now through June 15.