As Magic Kingdom Park’s 45th anniversary approaches this fall, this new weekly series will take a look at one of the park’s opening day attractions that can still be enjoyed today. This week, we’ll focus on the Walt Disney World Railroad.

There’s just something about steam trains. Their history. Their bright colors. Their sights, sounds (and steam!) just signify you’re about to embark on an unforgettable adventure.

The Walt Disney World Railroad debuted at Magic Kingdom Park on opening day to feature four steam trains with turn-of-the-century charm. Steam trains at a Disney Park are a tradition that started with Walt Disney himself, who considered a steam train a must-have in his plans for Disneyland park in California years earlier (and once even had a scaled-down version of a steam train called the Carolwood Pacific constructed in his own backyard). 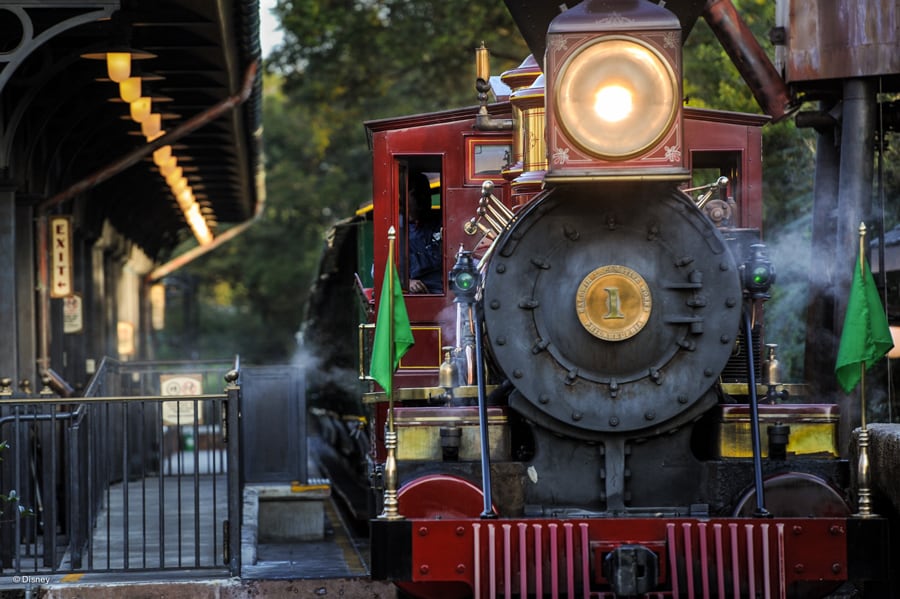 When planning a train system for Magic Kingdom Park, a fleet of four locomotives were purchased, each with their own interesting history. Manufactured by the Baldwin Automotive Works of Philadelphia between 1915-1928 for the United Railways of Yucatan, these trains spent years transporting jute and sugar through the Yucatan Peninsula. The locomotives were restored, repainted and put in place in time for the park’s opening on October 1, 1971.

Since opening day, the Disney fleet has consisted of three locomotives named after members of the Disney family – the Walter E. Disney, the Roy Disney, and the Lilly Belle (after Lillian Disney). A fourth train is named after Imagineer Roger E. Broggie.

Over the years, not much has changed with these moving pieces of history – especially the amount of joy they bring to our guests.