Disney Vacation Club Members and their guests had the chance to enjoy an exclusive performance of Disney’s hit Broadway musical, Aladdin, at the New Amsterdam Theatre in New York City yesterday – just one of many ways we’ve celebrated our 25th Anniversary this year with our Members.

With a little help from the magic maker himself, Genie, played by Tony Award-winning actor James Monroe Iglehart, Ken announced that Disney Vacation Club is contributing $25,000 to Make-A-Wish, a nonprofit organization dedicated to granting the wishes of children with life-threatening medical conditions. This contribution will help impact the lives of even more children and their families. 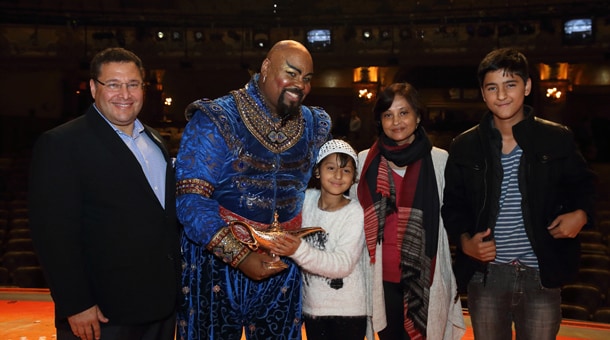 Disney has a long-standing relationship with Make-A-Wish. For the past 35 years, Make-A-Wish and Disney have granted more than 100,000 Disney-related wishes to children with life-threatening illnesses. Disney-themed wishes have included magical experiences at the Disney theme parks, voyages aboard Disney Cruise Line and even special backstage visits to television and movie sets.

We hope this contribution brings more magic to these incredible children and gives them the emotional and physical strength they need to fight their illness.