Disney guests (and Muppets fans) were in for a treat earlier this week when the new show, “The Muppets Present…Great Moments in American History,” made its official debut at Magic Kingdom Park. 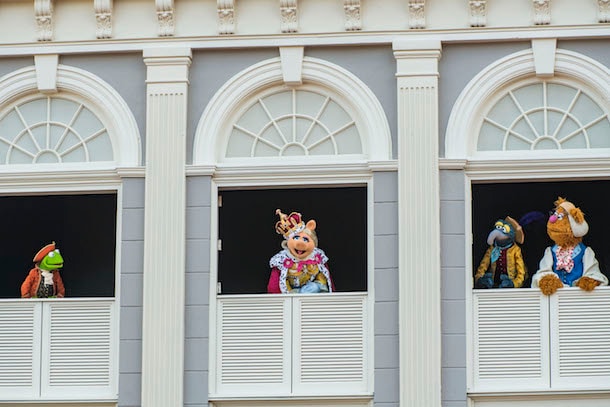 In the show, Sam Eagle, the always patriotic American eagle, joins Kermit the Frog, Miss Piggy, Fozzie Bear, The Great Gonzo and James Jefferson, town crier of Liberty Square, outside The Hall of Presidents. There, they retell tales from American history in humorous Muppets fashion – such as the midnight ride of Paul Revere and the signing of the Declaration of Independence.

According to Entertainment’s Tara Anderson, “The Muppets Present…Great Moments in American History” is sure to delight guests of all ages.

“The show really appeals to everybody, across generations, because the Muppets have such a wonderful history,” she said. “Parents are going to watch the show with their children and they’re both going to laugh! It’s the Muppets we know and love, but new.”

And, of course, the Muppets have been an unbelievably entertaining group for our team to work with.

“It’s been so much fun to work with the Muppets,” Entertainment’s James Silson said. “Everyone tries their hardest to present a truthful show of history, but ultimately get it wrong in a lot of places. Partly right…but mostly wrong.

His favorite Muppet star to work with?

“Miss Piggy is extremely particular about her fashion and what she wears, and she couldn’t do a show without multiple costume changes!”

Will “The Muppets Present…Great Moments in American History” be at the top of your list for your next trip to Magic Kingdom Park?