One of the unexpected benefits of taking part in a Disney Performing Arts program is that you never know when something extraordinary might unfold. This past Friday, the Wadsworth High School choir from Ohio got to experience a magical moment when the five-time Country Music Association (CMA) Vocal Group of the Year, Little Big Town, made a surprise appearance during the choir’s Disney Performing Arts workshop at Walt Disney World Resort.

As part of the kickoff of the fourth annual Music In Our Schools Tour, the group of country music singers showed up during the workshop at Disney’s Saratoga Springs Resort & Spa performance hall after earlier in the week singing the national anthem at College Football’s national championship game in Tampa. 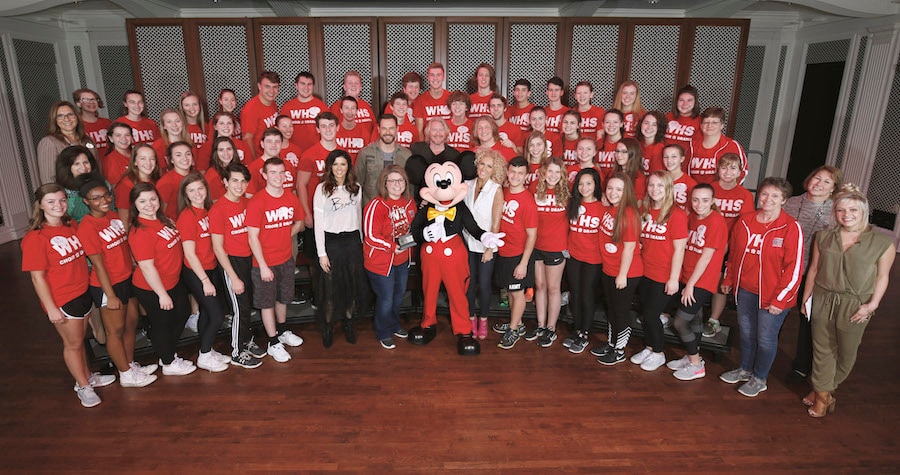 The country music stars spent some time sharing their own experiences within the music industry and stressed the importance of music in the lives of all students. Their words of wisdom aligned perfectly with the theme of the workshop, “Disney Sings,” in which students are immersed in a “real world” performance experience and record a portion of a Disney film soundtrack.

The 2017 Music In Our Schools Tour includes 10 stops across the country between, mid-February and April. Give a Note Foundation leads the tour efforts in collaboration with Radio Disney and the Country Music Association in support of music education programs in schools across the nation. Each tour stop will include community concert events and music program grants, with highlights of the tour airing during the Radio Disney Music Awards in April on Disney Channel.

For the Wadsworth High School choir, the tour kick-off will be one it will probably never forget. In addition to the appearance by Little Big Town, the choir learned valuable insights into the performing arts industry through the workshop. The workshops offered at Walt Disney World Resort and Disneyland Resort, help young performing arts students unlock their full potential and inspire them to make their dreams come true.