Each year, finalists from colleges across the United States arrive at Walt Disney Imagineering headquarters in Glendale, California, for the chance to showcase their engineering, technical and artistic skills, as well as an opportunity to interview for a coveted spot dreaming up the future of Disney Parks.

The annual Imaginations Design Competition is known for seeking out the next generation of Disney Imagineers, with some students landing internships or full-time positions. Out of the more than 330 project submissions this year, six teams were selected to visit the Glendale campus last week to compete and get a behind-the-scenes look at where Disney magic is created.

The challenge? Apply the same design principles used in Disney parks and resorts to design hypothetical outdoor spaces for a college campus. While not intended to be built by Disney, the projects allow students to demonstrate their skills and abilities in a creative exercise designed to showcase the types of challenges Imagineers face each day. Imagineers who are alumni of the program mentor each finalist team to refine their project, and a panel of Imagineers evaluates each project for its mastery and collaboration. 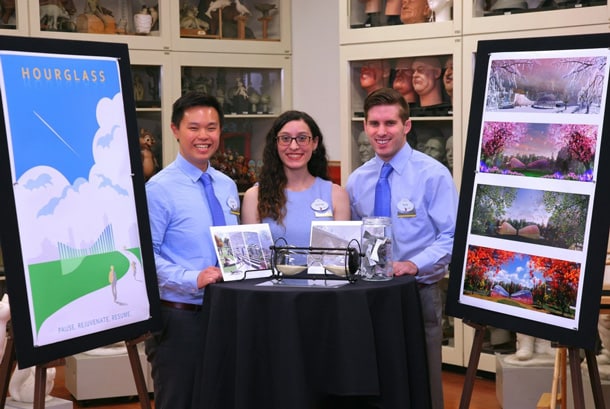 This year’s first place winners – Joshua Kurnia, Cristina Diaz and Alexander Doppenberg – hail from Iowa State University, walking away with a $1,000 grant for their school. Their “Hourglass” project envisioned a space shaped like a giant hourglass on its side, integrated with nature map projection and heated benches designed for guest relaxation. Congratulations to all of our competitors, and to the hundreds of students who have participated in Imaginations since its inception in 1991.