This week, we shared the exciting update that Miss Adventure Falls, a new family-style raft attraction at Disney’s Typhoon Lagoon Water Park, will open on March 12. 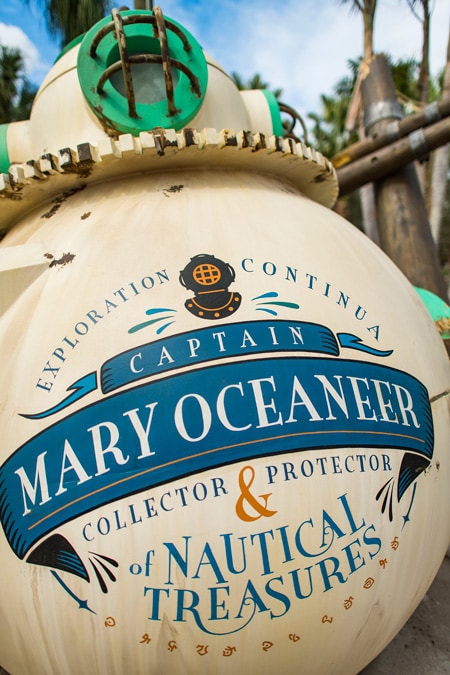 Disney Parks Blog readers were among the first to see a sneak peek of Captain Mary Oceaneer’s dive bell. Captain Mary Oceaneer is a sea-faring treasure hunter whose haul was caught in a rogue typhoon and the bell is just one of the many items you’ll see from her journeys around the world.

Check out our original story for more and keep checking the blog for more stories featuring Miss Adventure Falls. We also shared a new video showcasing Pandora -­ The World of Avatar, which is set to open at Disney’s Animal Kingdom on May 27, 2017.

In the video, AVATAR Creator/Director James Cameron gave a sneak peek at what you can expect from this new land and one of its major attractions, Avatar Flight of Passage, which will allow guests to ride a Banshee over the world of Pandora.

Disney’s ‘Beauty and the Beast’ Premieres at Shanghai Disney Resort’s Disneytown – The beautiful Walt Disney Grand Theatre at Shanghai Disney Resort played host to the Chinese premiere of Disney’s “Beauty and the Beast” this past weekend, drawing fans from across the country for a glimpse at the tale as old as time and the stars who brought it back to the big screen.

Adventures by Disney Announces New Themed River Cruises in 2018 – Have you ever wanted to stroll through a quaint French town like Belle? Sip wine in some of the most noteworthy wine growing regions in the world? Dance along with a polka band during a rousing German Oktoberfest celebration? In 2018, Adventures by Disney will bring you all these experiences and more on our popular European river cruises!

Disneyland Paris Reaches Unique Milestone On Eve of 25th Anniversary – Many of you know we’re just days away from celebrating 25 years of magic at Disneyland Paris. It’s a significant milestone that began with an agreement between The Walt Disney Company and French authorities – 30 years ago last week. To mark the signing of the “Main Agreement” in 1987 that led to creation of Euro Disneyland and then Disneyland Paris, French President François Hollande paid a special visit to the Resort and spent time with cast members who bring the magic to life for guests every day.

#ArtfulEpcot Will Make Another Appearance in 2018 – Another great year for Epcot festivals has begun. As we get ready to celebrate the kickoff of the Epcot International Flower & Garden Festival this week, we wanted to share some good news with you. The Epcot International Festival of the Arts will return to Epcot in early 2018!