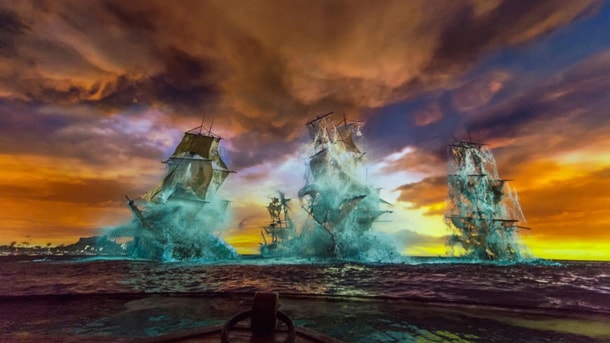 Shanghai Disney Resort added five more awards to its roster over the weekend, this time from the largest trade association for the themed entertainment industry in China — the China Association of Amusement Parks and Attractions (CAAPA). The resort’s spectacular first year of operation also includes accolades from the Visual Effects Society, TEA and IAAPA, the international counterpart of CAAPA.

Accepting its third major industry award to date, Pirates of the Caribbean: Battle for the Sunken Treasure was honored with an Award for the Innovative Amusement Facilities in a China Theme Park. The attraction continues to wow guests from around the world for its ambitious storytelling at the hands of cutting edge technology never before seen in a Disney park.

Also, Soaring Over the Horizon received an Award for Innovative Cultural Product in a China Theme Park, and Mickey’s Storybook Express received an Award for Best Performing Arts Offerings in a China Theme Park. Both offerings represent experiences unique to our resort in Shanghai. Did you know Mickey’s Storybook Express travels down the longest parade route at any Disney park? These are just a few of the can’t-miss options waiting for you at Shanghai Disneyland.

Shanghai Disney Resort’s first anniversary is just around the corner in June, so keep an eye on the Disney Parks Blog for more news as the resort approaches this exciting milestone.