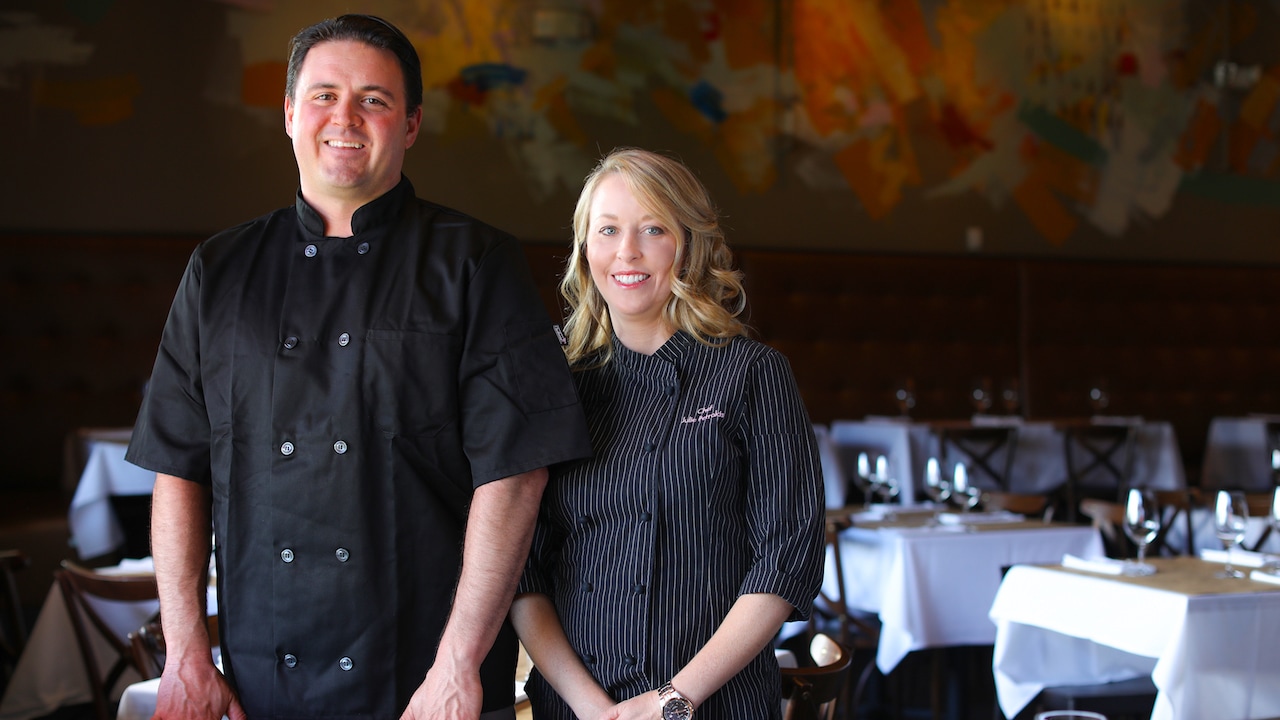 Finishing touches are being made for the April 10 opening of The Polite Pig in Town Center at Disney Springs, the newest concept for award-winning Orlando Chefs James and Julie Petrakis. The husband-wife team, also owners of The Ravenous Pig and Swine & Sons in Winter Park and Cask & Larder at Orlando International Airport, are opening this newest concept with James Petrakis’ brother Brian.

The Polite Pig will feature “modern barbecue” in an open kitchen, with Southern sides like a tomato and watermelon salad, mac and cheese and smoked corn with lime butter. (Sauce fans, there’s a bar with seven different ways to top your ‘cue, from Layla’s Sweet to Fresno Hot Sauce.) Add a solid selection of craft beers and cocktails, and a bourbon bar with more than 50 selections, from small batch bourbons to a Pappy Van Winkle 23-Year Family Reserve.
We talked with Julie, who met James, by the way, while studying at the Culinary Institute of America in Hyde Park, N.Y. Both are Central Florida natives.

Why did you decide to open at restaurant at Disney Springs?
Disney approached us with the idea of opening a fast-casual outpost that would represent the atmosphere and quality of our Winter Park location, The Ravenous Pig. We shared their enthusiasm for bringing a true local restaurant to Disney Springs.

Is the menu similar to The Ravenous Pig and Cask & Larder, your other restaurants in Central Florida?
I would say that the menu is similar in its approach to using quality, seasonal ingredients, with our signature touch. We’ll have Cask & Larder Brewery beers, cocktails on tap and also an extensive Bourbon Bar. And this restaurant will focus a bit more on wood-smoked and grilled items.

Anything you’ll offer at The Polite Pig that will be a signature, or exclusive to that restaurant?
Most of the menu will be exclusive to The Polite Pig: modern barbecue with The Ravenous Pig twist. Like the Southern Pig Sandwich with pulled pork off the smoker, apple slaw, mustard sauce and Duke’s mayo; peel-and-eat shrimp with bourbon-cocktail sauce, and crispy Brussels sprouts with whiskey caramel.

Who will be the chef daily in The Polite Pig kitchen?
We have two of our Ravenous Pig/Cask & Larder veterans at the helm, Jared Thate and Allie Weldon, along with Chef James Petrakis’ guidance and inspiration.

Tell us about the craft beer program.
We will feature four of our beloved Cask & Larder Brewery brews on tap, as well as a couple other Florida/domestic craft beers.

Anything special about The Polite Pig cocktails?
We will feature five house cocktails on tap, including some of our crowd favorites from The Ravenous Pig, such as the Gin and Tonic and Old-Fashioned.

How many seats and describe the décor.
We’ll have 190 seats, and the décor pays homage to the beloved swine of The Polite Pig, as well as antiquity. Whimsical pigs on various adventures can be seen throughout the space, and rustic touches are used for custom featured art pieces. Large faded graphics also adorn the main wall of the space adding to the feel of the long-time family run business.

What’s your favorite dish on The Polite Pig menu?
My favorite appetizer is the Hop Salt Pretzel with beer cheese fondue and IPA mustard. Favorite sandwich: the Salmon BLT with bacon jam, marinated tomato, romaine and aioli. I love that with a side of charred broccoli tossed with herb buttermilk dressing and house granola.

What do you think is the secret to good food?
Using quality seasonal ingredients and taking great care of it by enhancing with smoke/cooking, proper seasoning and passion!