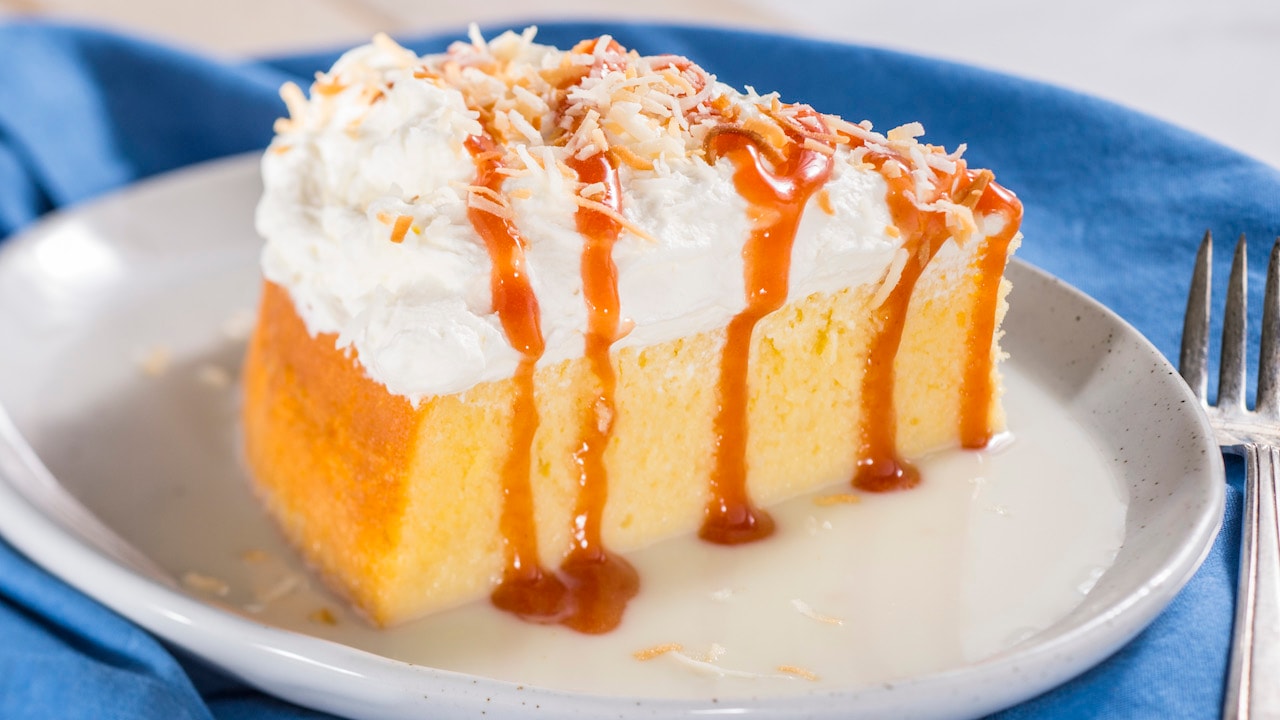 The weather has officially reached the 90-degree mark in Central Florida, and there’s nothing more enjoyable as a summertime dessert than sweet, cool Tres Leches Cake. This delicious recipe was developed by the culinary team at Epcot as part of the Epcot International Flower & Garden Festival, and we’re sharing it just in time to celebrate Cinco de Mayo on May 5.

FOR CAKE:
1. Preheat oven to 350°F. Grease and flour 10-inch cake pan and set aside.
2. Sift together flour and baking powder in a small mixing bowl.
3. Place egg yolks and 1/2 cup sugar in bowl of standing mixer with wire whisk. Whip on high speed to thick, light ribbon stage.
4. Remove from mixer, pour liquid into large mixing bowl and set aside. Clean bowl of standing mixer.
5. Place egg whites in bowl of standing mixer with wire whisk and beat until foamy. Add cream of tartar and remaining 1/2 cup sugar. Whip on medium speed until whites are glossy and stiff, but not dry.
6. Remove bowl from mixer and fold one-third of egg whites into whipped egg yolks. Repeat until all egg whites are incorporated.
7. Sprinkle one-third of sifted flour over batter and fold in. Repeat until all flour is incorporated. Pour into prepared cake pan and bake until golden brown and spongy, about 30 minutes.
8. Remove cake from oven and place pan on wire rack. Soak with syrup while cake is warm, repeating until cake is thoroughly saturated.
9. Ice cooled cake with whipped cream. Sprinkle with coconut and drizzle guava paste. Refrigerate until ready to serve.

FOR SYRUP:
1. Mix all ingredients in medium bowl.

This recipe has been converted from a larger quantity in the restaurant kitchens. The flavor profile may vary from the restaurant’s version. All recipes are the property of Walt Disney Parks and Resorts U.S., Inc., and may not be reproduced without express permission. ©Disney