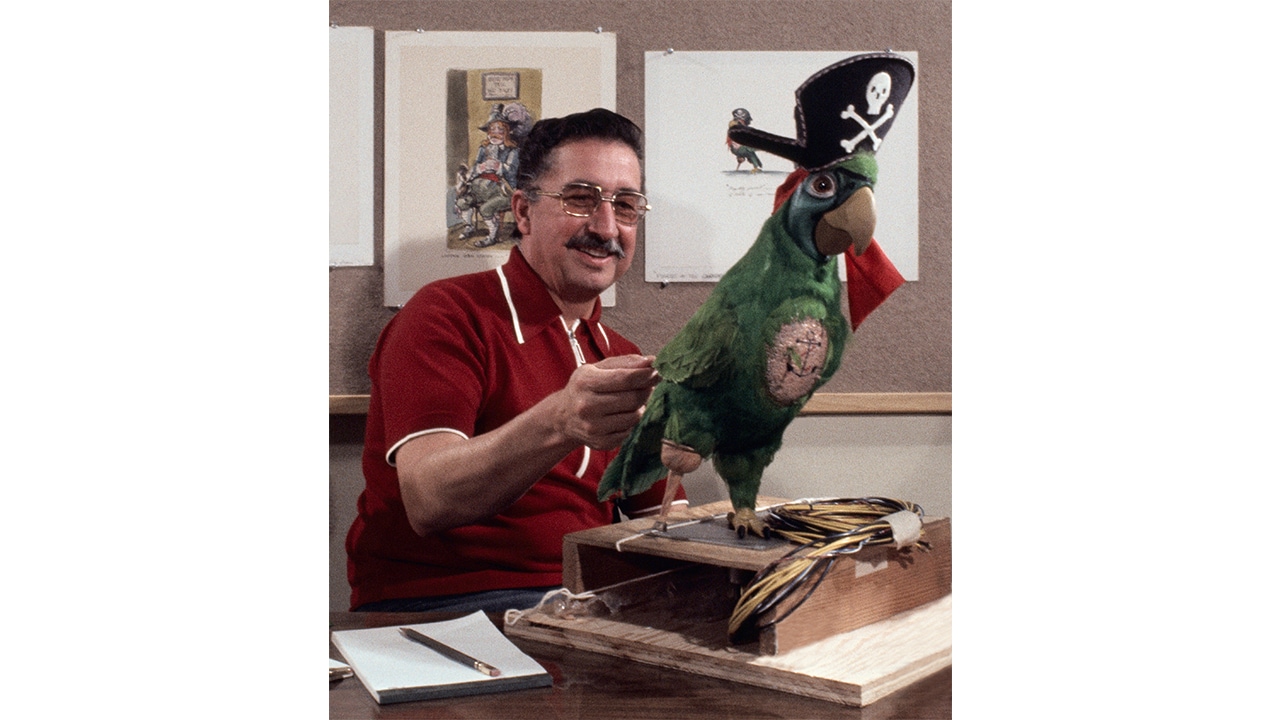 Disney Legend Xavier “X” Atencio, a former Imagineer and Disney animator, passed away on September 10 at the age of 98. X was responsible for helping bring to life a number of beloved Disney Parks attractions including Pirates of the Caribbean and Haunted Mansion, as well as such animated classics as Pinocchio and Fantasia.

Born on September 4, 1919, in Walsenburg, Colorado, X—whose friends shortened his name from Francis Xavier to simply “X”—moved to Los Angeles in 1937 to attend the Chouinard Art Institute. X thought a job at Disney was out of his reach, but the then-18-year-old artist’s instructors prodded him to submit his portfolio. In 1938, when he got the good news from Disney, X ran from the original Hyperion Avenue studio to his aunt’s house shouting, “I got a job at Disney! I got a job at Disney!”

X first saw his work on screen at the 1940 premiere of Pinocchio, and as he watched, he was incredibly moved by seeing the audience’s reaction. That year, he was promoted to assistant animator for Fantasia but left temporarily to join the Army Air Corps in the war effort, where he earned the rank of Major.

Upon his return in 1945, he picked up where he left off, returning to the studio and working for the next eight years on animated short subjects. His first on-screen credit was for Toot, Whistle, Plunk and Boom in 1953, an Oscar®-winning film that took audiences through the history of music. Other films X contributed to during this time included Noah’s Ark (1959) and A Symposium on Popular Songs (1962), both Academy Award® nominees, as well as Jack and Old Mac (1956). He worked on the “I’m No Fool” series for the original Mickey Mouse Club, and in the 1960s, X provided memorable stop-motion sequences for Disney feature films The Parent Trap (1961), Babes in Toyland (1961), and Mary Poppins (1964).

At the request of Walt Disney, X transferred to WED Enterprises (later Walt Disney Imagineering) in 1965 to work on the Primeval World diorama for Disneyland. At first, X was unsure of the move to WED: “I went over there reluctantly because I didn’t know what I was getting into, and nobody there knew what I was supposed to do either,” he recalled. “About a month later I got a phone call from Walt. He told me ‘I want you to do the script for the Pirates of the Caribbean.’” From that point on, X cemented his legacy at WED, playing a key role in the development of music and dialogue for the attraction, including co-writing the iconic song, “Yo Ho (A Pirate’s Life for Me).” For the Haunted Mansion, he wrote the attraction’s dialogue and co-wrote the song “Grim Grinning Ghosts.” For Walt Disney World, he contributed to If You Had Wings and Space Mountain at the Magic Kingdom, as well as Spaceship Earth, World of Motion, and the Mexico pavilion at Epcot. Throughout his career, X always said that his reward, as it was in the days of Pinocchio, “is still the audience’s reactions.”

“X was an enormous talent who helped define so many of our best experiences around the world,” said Bob Weis, president of Walt Disney Imagineering. “Some may not know that when he wrote the lyrics for ‘Yo Ho’ he had never actually written a song before. He simply proposed the idea of a tune for Pirates of the Caribbean, and Walt told him to go and do it. That was how X worked—with an enthusiastic, collaborative attitude, along with a great sense of humor. His brilliant work continues to inspire Imagineers and bring joy to millions of guests every year.”

X retired from Disney in 1984, but continued working as a consultant to Walt Disney Imagineering for many years, and was inducted as a Disney Legend in1996. He is survived by his wife, Maureen; his children Tori McCullough, Judianne, and Joe; his stepchildren Brian Sheedy, Kevin Sheedy, and Eileen Haubeil; sons-in-law Mike McCullough and Chris Haubeil; daughters-in-law Kathy Atencio, Trish Sheedy, and Beth Sheedy.