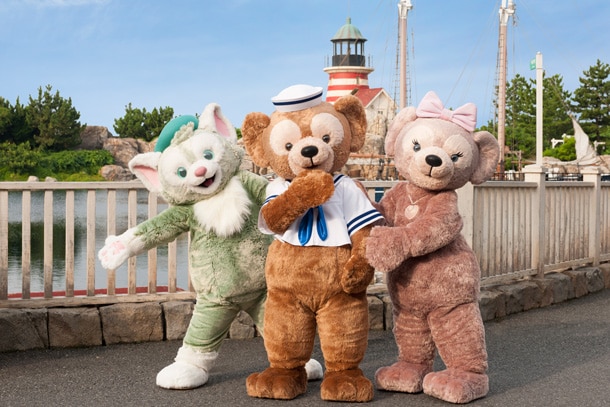 To celebrate Duffy’s Heartwarming Days, the Cape Cod area of Tokyo DisneySea’s American Waterfront will transform into the happy world of Duffy and his friends ShellieMay, Gelatoni and StellaLou. You can greet Duffy at the Village Greeting Place and ShellieMay near the Cape Cod Cook-Off, and dozens of new merchandise items and special souvenirs will be available across the area.

Also at Tokyo DisneySea, guests of all ages can enjoy their favorite Disney•Pixar stories during Pixar Playtime. If you’re lucky enough to visit the Pixar Playtime Pals show at the Piazza Topolino, you’ll be challenged to complete three games inspired by “Toy Story,” “The Incredibles,” and “Finding Nemo.” You can also catch the world-famous racer Lightning McQueen during his daily Victory Lap through the American Waterfront.

For any burgeoning chefs out there, join the cheerful chef-in-training Remy in front of Zambini Brothers’ Ristorante for the daily show, Chef Remy & You. You can also sample items from the special Coco-inspired menu at Miguel’s El Dorado Cantina or one of the other special Pixar-inspired menus at restaurants around the park. And don’t forget to pick up a few special souvenirs! You can visit Anna and Elsa’s Frozen Fantasy at Tokyo Disneyland for a glimpse at the enchanting world of ice and snow, where you can meet the royal sisters themselves and their friend Olaf. During the day, check out the Frozen Fantasy Parade, starring Anna, Elsa, Olaf, Kristoff, Hans and the Trolls. There will be music, light and maybe even a little snowfall, courtesy of Elsa’s magical powers!

At night, the skies will be awake with Frozen Forever, a nighttime spectacular featuring favorite songs and scenes from the movie, as well as a dramatic pyrotechnic finale. Exclusive merchandise featuring designs of Anna, Elsa and Olaf will be available, and you’ll find special dishes inspired by the film at the Sweetheart Café, Grandma Sara’s Kitchen and Refreshment Corner, and Plaza Pavilion Restaurant.

And if you’re looking for chills this winter, the new limited-time experience Tower of Terror: Level 13 “Shadow of Shiriki” will also be offered starting January 5.

There’s so much to do and see at Tokyo Disney Resort, and we can’t wait to offer even more with the start of the 35th Anniversary celebration later in 2018! Stay tuned to the Disney Parks Blog for more about how you can celebrate along with us.