Star Wars fans from across the galaxy are making plans to attend this year’s Star Wars: Galactic Nights event, which will be held at Disney’s Hollywood Studios on December 16. With celebrity appearances, Star Wars: Galaxy’s Edge panel discussions, Star Wars-inspired entertainment, fireworks, themed photo ops and much more, the event will truly be the perfect way for Star Wars fans to celebrate the opening of Star Wars: The Last Jedi.

We’ve previously shared a full rundown of this year’s Star Wars: Galactic Nights activities in this blog post – but with so much fun offered in just one evening, we want to make sure you make the most of it.

Here are some new ways event attendees can really let their inner Jedi shine at the event.

First off, guests attending the event will have the opportunity to purchase event-exclusive merchandise, including Star Wars: Galactic Nights t-shirts, tumblers and pins. 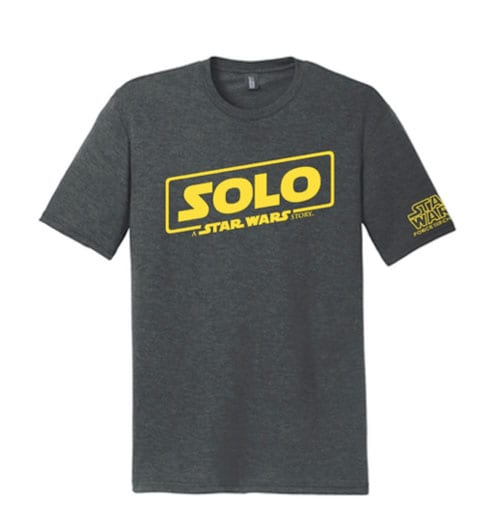 While you’re celebrating Star Wars: The Last Jedi and taking advantage of all of the Star Wars-related activities at the event, it’s never too early to start preparing for Solo: A Star Wars Story! These shirts are the first products for the film created especially for Disney Parks and will be available through May 25, 2018. On behalf of Star Wars: Force for Change, 25% of the retail sale price of this product will be donated to UNICEF USA in support of UNICEF Kid Power. The Adult Tee will be at Disney’s Hollywood Studios for Star Wars Galactic Nights on December 16, 2017. This item will then roll out to the various locations starting December 17th. Learn more at ForceForChange.com.

And speaking of merchandise, to celebrate the debut of Star Wars: The Last Jedi, anyone attending the event who presents a proof of purchase or ticket stub from the opening weekend of the film, December 14-17, will receive a commemorative holiday ornament. One per guest, while supplies last.

Guests who really want to show their Star Wars spirit at the event can do so by getting a makeover from a galaxy far, far, away, thanks to a Senses-A Disney Spa Pop-Up Experience. They’ll be set up in the Sunset Boulevard area of the park to offer three different makeover packages that include Star Wars-inspired nails, makeup and hair transformations. Makeovers take 30-60 minutes (depending on the package) and range in price from $50-90 for children and $80-120 for adults.

If a “digital” makeover is more your style, be sure to download Snapchat – or simply open your app – throughout the night at the different photo stops located throughout the event. A total of eight different location-based Snapchat filters have been created specifically for this event.

And one last tip – all event attendees should also be on the lookout for a special takeaway upon exit at the end of the evening.

Which activity or element of Star Wars: Galactic Nights are you most excited about? Tell us in the “Comments” section below.