Season’s greetings to you and yours! Walt Disney Parks and Resorts has many great traditions that make the holiday season merry and bright, and one of my favorite traditions at Disney Parks is our commitment to support local communities and share the joy with families around the world. It’s truly the most wonderful time of the year.

Walt Disney World Resort volunteers worked with the U.S. Marine Corps to collect more than 27,000 toys and gifts for the annual Toys for Tots drive. Cast members also served meals at the local Coalition for the Homeless, created stockings and bears for the Salvation Army, made comfort kits for children in Puerto Rico and brought the Disney Kids & Family Zone to a holiday community event. 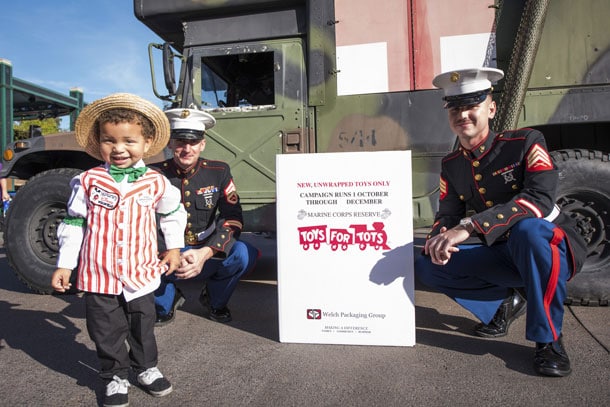 Disneyland Resort worked with the U.S. Marine Corps Reserve and Anaheim Fire & Rescue to collect nearly 10,000 Toys for Tots donations, and Disney VoluntEARS brought the spirit of the season to patients at the Children’s Hospital of Orange County with a holiday party that included a giant gingerbread carousel. Even more volunteers decorated the Single Marine Program Recreation Center, a home away from home for service men and women at Camp Pendleton in California.

With the help of Mickey, Minnie and Goofy, Disney Cruise Line crew members visited more than 1,500 children across the Bahamas and the Caribbean and dressed teddy bears in cruise-ready attire for Salvation Army Orlando Area Command. Cast members from Disney’s Hilton Head Island Resort and Disney’s Vero Beach Resort gave back to their local communities by crafting with kids and supporting local outreach events.

Disney VoluntEARS from Aulani, a Disney Resort & Spa decked the halls of the Fisher House Hawaii, where patients and families stay while receiving medical care at the Tripler Army Medical Center. Volunteers from Disneyland Paris and several Disney characters visited the French presidential residence, Elysée, during a Christmas celebration to bring holiday joy to 500 kids from around France. Earlier this month, more volunteers helped with the annual AFM-Téléthon, the biggest fundraising event in the world which raises money for genetic, rare and progress disease treatment research.

Cast members in Europe also donated hundreds of presents to Mission Noël and supported visits to Disneyland Paris for underserved children and families from France and the United Kingdom.

Disney VoluntEARS also visited hospitals and elderly care centers around Hong Kong, and in Tokyo, Disney VoluntEars joined with hundreds of community volunteers to celebrate the holidays with children at a local orphanage.

Our Disney Parks VoluntEARS are more committed than ever to carry on the Disney legacy of volunteerism and share the joy in their communities every day. Last year alone, Disney VoluntEARS donated more than 542,000 hours of community service to benefit nonprofit organizations and enrich the lives of children and families around the world.