Guests visiting Aulani, a Disney Resort & Spa in Hawai‘i may notice a change in our dining areas that has nothing to do with the food. Aulani Resort’s food and beverage cast members are donning new costumes designed exclusively by Tori Richard, a Hawai’i-based clothing designer.

These costumes are more than just locally designed, cut and sewn; they delve deeper into the story of Hawai‘i, and of Aulani Resort itself! 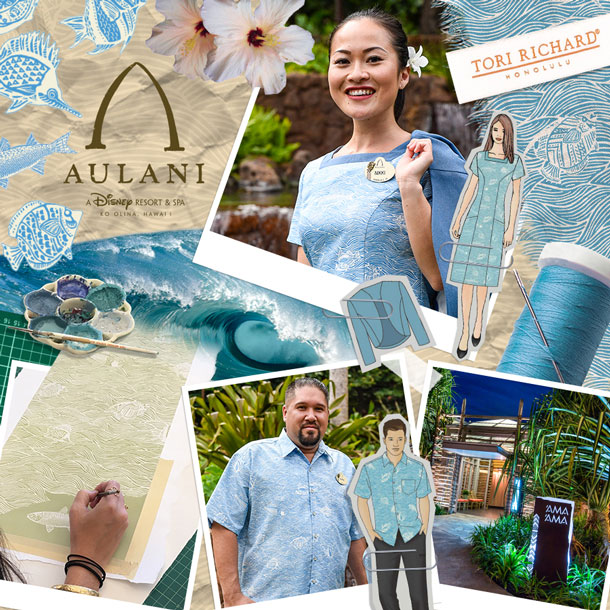 Several costumes feature the sketch-like Hukilau print, which depicts six fish that are indigenous and one fish that is endemic to Hawai‘i. “Hukilau” refers to the Hawaiian fishing method which uses a net lined with with tī leaves to attract fish. If you look closely, the ʻamaʻama mullet fish can be found in the design of the ocean blue costumes for the resort’s signature restaurant, ‘AMA‘AMA.

Fun fact: you can find the real fish swimming in our snorkel lagoon Rainbow Reef, including the humuhumunukunukuāpua‘a—Hawai‘i’s state fish. 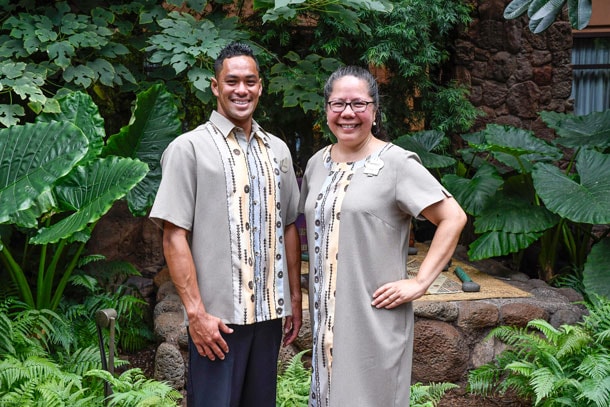 Costumes worn by The ‘Ōlelo Room and poolside service cast members are inspired by kapa—a fabric that Hawaiians make from the beaten bast fibers of certain plants. Hawaiians then use bamboo stamps to decorate kapa with designs that tell their own story.

The ʻŌlelo Room costumes have a print reminiscent of the kapa bands found in the Maka‘ala lobby mural by artist Dalani Tanahy. This print’s design depicts a sun-shaped sea urchin called hāʻukeʻuke.

More costumes—along with more stories—will debut over the next year. Be sure to keep your eyes open and see what you can discover on your next visit to Aulani Resort!