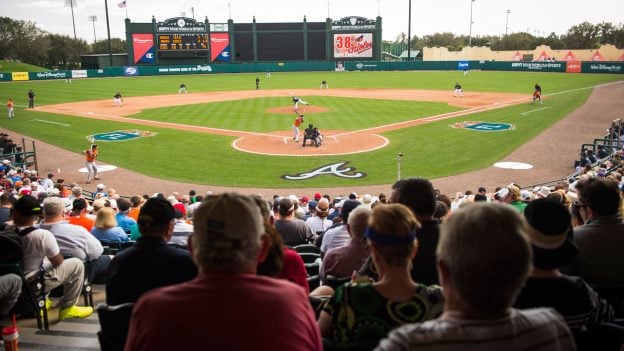 Atlanta’s rather impressive lineup contains several seasoned veterans and a bevy of talented newcomers, so watching this team this spring should be an exciting proposition for Braves fans.

Disney character appearances and special moments such as kids running the bases after every game are some of the in-game entertainment opportunities that make Braves spring training at Disney a unique experience.

From a concessions perspective, Braves fans will be able to sample several new food and beverage options this season including the new Latin Rice Bowl (chicken or pork), which is available on the third-base patio at the stadium.

For those Braves fans who enjoy specialty craft beers, there are four new offerings this spring at the stadium.

Chopsecutioner, the first new craft beer, is produced by the Terrapin Beer Company in Athens, GA. This beer has a citrusy, hoppy flavor which is nicely paired with the beef brisket from Barbecue Smokehouse.

Bell’s Oberen Ale wheat beer from Bell’s Brewery in Michigan is available and should be paired with the chicken nugget basket from Champion Stadium’s Home Plate Grill.

Una Mas Amber Lager from Left Coast Brewing in California is the third new craft beer, which goes great with the buffalo chicken sandwich at the stadium, while Dock Light IPA from 3 Daughters Brewing in St. Petersburg, Florida rounds out the new craft beer selections. It should be paired with mini-hotdogs and brats from Slider Station on the third-base patio at the stadium.

We’ll see you all at the ball park!