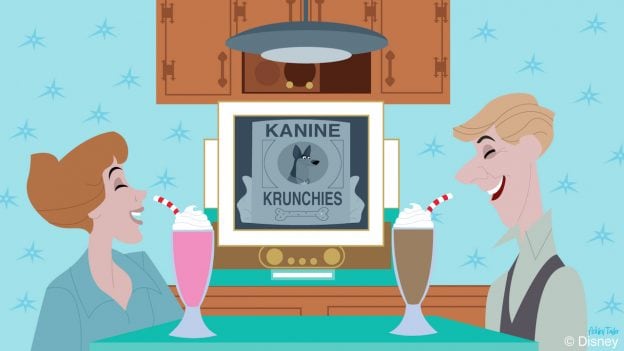 Our Disney Doodles blog series continues this week with another doodle inspired by Valentine’s Day.

Last week, artist Ashley Taylor imagined what Pongo and Perdita from the 1961 film “101 Dalmatians” would do if they visited a Disney park. Today, she’s taking a look at what their human friends – Anita and Roger – would do if they had the same opportunity.

According to Ashley, they’d like seek out some treats and TV time, which makes the 50s Prime Time Café at Disney’s Hollywood Studios the place to be.

“The milkshakes at 50s Prime Time Cafe are the best I have ever had!” she said. “I can easily imagine Roger and Anita sharing milkshakes and having a great time!”