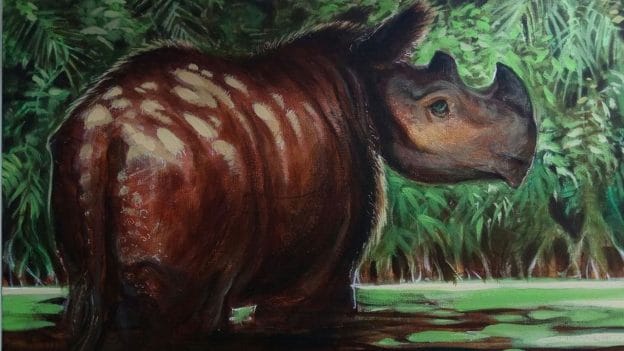 With fewer than 100 of their species remaining, the Sumatran rhino holds the title of the most endangered land mammal in the world. Found in Indonesia, these rhinos are so elusive that most people have never seen one. The International Rhino Foundation is working to increase awareness of this beautiful animal so that sightings may one day become less rare. One of the ways they are doing this is through an art exhibition and auction, and Imagineers are lending their creativity to the cause.

As part of Disney efforts to reverse the decline of Sumatran rhinos, Imagineers Joe Rohde, Morgan Richardson and Zsolt Hormay joined Indonesian artists and wildlife photographers in contributing artwork to the Sumatran Rhino Art Exhibition: Indonesia’s Hidden Treasure. The exhibition and online auction are raising awareness and advocacy for the Sumatran rhino while also raising funds to support future conservation initiatives. All the proceeds from the sales of their artwork will go to Sumatran rhino conservation programs within the International Rhino Foundation. Bidding will end Feb. 14. Joe, portfolio creative executive for WDI, believes we all have a responsibility to be a voice for the voiceless and help every animal in need.

“Each of us must do our part in our own way to help the world of wild animals and wild places,” Joe said. “We who are artists have a particular skill to inspire and move people’s emotions. I am happy to have the opportunity to apply those skills on behalf of these wild brothers and sisters of the forest.” You, too, can be an advocate for the Sumatran rhino. Engage in the conversation on social media and let everyone know about these amazing animals, and what you are doing to protect them in the wild.

Quick Facts about the Sumatran Rhino: