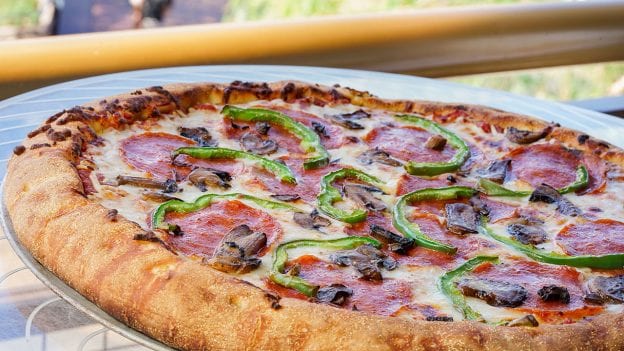 Oooooooooh – everyone’s favorite Aliens from Disney•Pixar’s “Toy Story” will be invading Disneyland Resort for Pixar Fest, and we are eternally grateful! For the duration of the festival, Redd Rockett’s Pizza Port in Disneyland park will transform into Alien Pizza Planet – “A Better Place.” The Aliens have sourced the finest ingredients from across the universe to deliver fresh, hot pizzas that are out of this world. A specialty of their home planet Pepperonia is a special pepperoni pizza topped with green peppers and mushrooms. They’ll also be cooking up a hearty cheeseburger pizza with ketchup, yellow mustard and pizza sauce on a sesame seed crust and topped with cheese, caramelized onions, diced tomatoes, slider patties, a house-made burger sauce, and pickles.

If you’re as excited as I am for this fun-filled re-imagination of Redd Rockett’s Pizza Port, stay tuned for more details on the deliciously cheesy menu.

This exciting transformation is just one of the many offerings coming as part of Pixar Fest at the Disneyland Resort, which will run from April 13 through September 3. The festival will span both Disneyland park and Disney California Adventure park, bringing not only creatively-themed food, but also a new fireworks show, “Together Forever—A Pixar Nighttime Spectacular,” the return of the “Paint the Night” parade and much more!