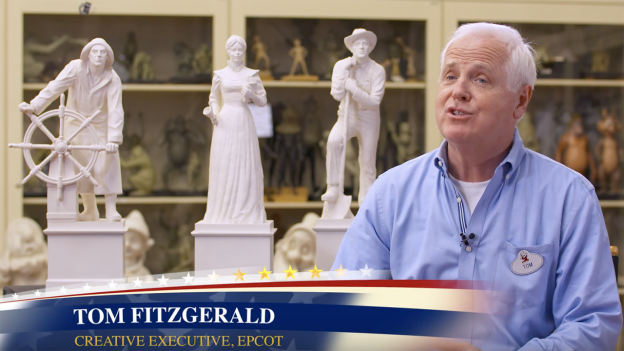 Having lived in Florida for more than four decades, I have very vivid memories of the parks – especially Epcot. Music plays a huge part of those memories, including signature songs from some of the World Showcase pavilions.

One of the most beloved of those songs has gotten a glorious new reimagining, courtesy of the magicians of Walt Disney Imagineering and some very special musicians.

“Golden Dream,” is the patriotic theme song for The American Adventure pavilion’s attraction, which features a tribute to some of the most quintessential moments in American history, hosted by American author Mark Twain and statesman Benjamin Franklin.

Working with famed pop/rock music producer Harvey Mason Jr., the team infused modern, “cinematic sensibilities” into the new version of the song, while keeping true to its original vision.

The American Adventure recently reopened at Epcot, enhanced with a digital projection system, new speakers, and updates to the finale sequence. As part of this refurbishment, the attraction’s anthem was re-orchestrated to give it a fuller, richer and more contemporary sound.

For more on Epcot, keep checking out the Disney Parks Blog.