Easter is here and our pastry chefs have once again outdone themselves with their beautiful Easter egg displays and bunny-themed cupcakes. We even have a few Easter brunch offerings to share with you. Here’s everything you need to know about all of the Easter offerings this year at Walt Disney World Resort! 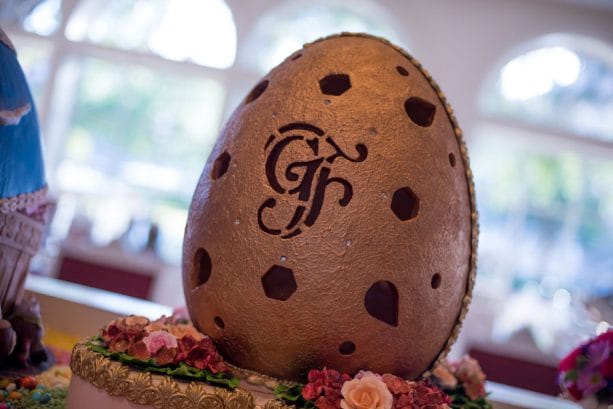 This year marks the 7th Annual Easter Egg Display at Disney’s Grand Floridian Resort & Spa, which is designed and hand-decorated by the Grand Floridian Bakery Team. This beautiful display of chocolate eggs will be on display through April 9 in the resort lobby. Each egg is ornamented with edible products such as modeling chocolate, fondant, sugar floral royal icing, colored cocoa butter, and sculpted sugar art pieces. 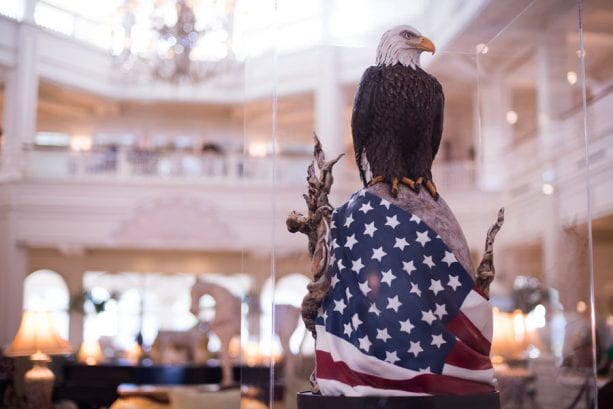 In the 1st floor lobby of Disney’s Contemporary Resort, you’ll find a magical array of Easter eggs inspired by some of Disney’s most popular animated classics such as “Beauty and the Beast,” “Alice in Wonderland,” “Jungle Book,” “Lilo & Stitch,” and more. And if you look closely, you might even find the signatures of your favorite Disney pals! This year marks the 6th anniversary of this amazing Easter egg display, designed by the Contemporary Bakery Team. These adorable chocolate eggs will be on display through April 4. 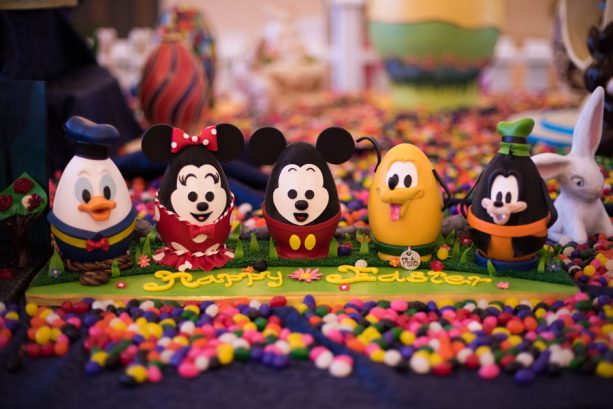 At Disney’s Beach Club Resort, a beautiful chocolate Easter egg display will be located in the resort lobby through April 3. And for the first time ever, you can purchase custom Mickey and Minnie chocolate eggs to take home with you. These special eggs will be available for purchase through April 1. Now, if you’re looking for some more tasty Easter treats, we’ve got a few special cupcakes that you’ll want to know about. At Epcot, you’ll find Easter cupcakes at Fountain View and Sunshine Seasons. Fountain View’s cupcake will be available on March 30–April 2. This chocolate cupcake has a marshmallow filling and is topped with buttercream icing. Sunshine Seasons’ cupcake features an adorable fondant bunny with buttercream, cookies and cream crumble, and jelly beans all on top of a vanilla cupcake, and will only be available on April 1. At Disney’s Hollywood Studios, you’ll find another bunny-themed vanilla cupcake through April 2. This Springtime Cupcake comes with raspberry filling and is topped with buttercream frosting and white chocolate bunny ears. It will be served at The Trolley Car Café, Rosie’s All-American Café, Fairfax Fare, and ABC Commissary.

Creature Comforts at Disney’s Animal Kingdom Theme Park will be serving up an Easter Cupcake on April 1. This vanilla cupcake is filled with key lime curd and is topped with coconut buttercream and cute little fondant eggs.

Also at Intermission Food Court, an Easter Brunch Buffet will be offered from 9am-2pm on April 1. The buffet will feature an array of delicious items such as red velvet pancakes, fresh fruit and pastries, spinach salad with bacon vinaigrette, sweet potato casserole, cooked-to-order omelets, brown sugar-glazed ham with orange blossom honey mustard sauce and much more!

Over at Boatwright’s Dining Hall at Disney’s Port Orleans Resort – Riverside, you can partake in an Easter brunch on April 1, available from 10am-2pm. This brunch will feature southern cuisine such as eggs benedict with crab, southern shrimp and grits, and Nashville hot chicken on a honey biscuit, as well as special Bloody Marys and Mimosas.

There will also be an Easter brunch at Ale & Compass Restaurant at Disney’s Yacht Club Resort from 7:30am-2pm on April 1. This brunch will include All-You-Care-To-Enjoy items such as assorted flatbreads, seasonal salads, and house-baked pastries and spreads as well as a choice of entrée with a specialty mimosa or non-alcoholic beverage.

All three of these Easter brunch dining experiences require no reservations, and will only be available on April 1, 2018.

So hop on down to Walt Disney World Resort for Easter this year to check out these adorable and delicious offerings!