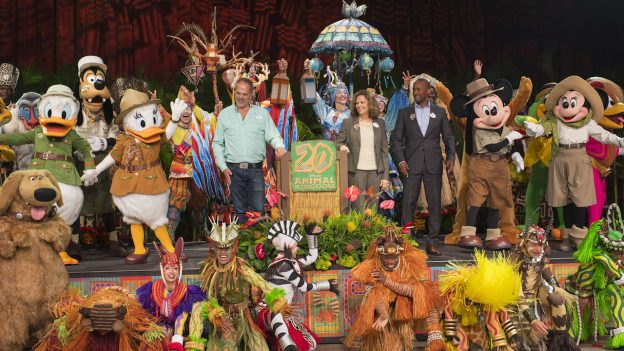 Our live broadcast of Disney’s Animal Kingdom’s anniversary celebration has just concluded – but you can still catch the replay below.

Don’t forget the park’s ‘Party For the Planet’ anniversary celebration will stretch from April 22-May 5. During that time, Rafiki’s Planet Watch will take center stage for the celebration, which will offer backstage experiences that allow guests to learn about animal nutrition, visit the veterinary hospital, or hear how Disney promotes global wildlife conservation.

Guests can now catch the new show, “UP! A Great Bird Adventure,” which features Russell and Dug from the Disney•Pixar animated comedy-adventure film “UP” on a daily basis. And as we previously shared, the astounding Pandora Utility Suit that studies wildlife, collects plant samples and educates guests about Pandora can now be encountered in Pandora – The World of Avatar.

For more information on the 20th anniversary of Disney’s Animal Kingdom, visit Disneyworld.com/PartyforthePlanet.