With Earth Day right around the corner, I’m thrilled to share details with you about the next milestone in Disney’s continued commitment to environmental stewardship. Walt Disney World Resort recently embarked on a new initiative in collaboration with the Reedy Creek Improvement District and solar project developer Origis Energy USA to bring a new 270-acre, 50-megawatt solar facility online by the end of the year, generating enough renewable clean energy to power two of its four theme parks in Central Florida!

This solar facility will include half a million solar panels and will also reduce greenhouse gas emissions by more than 57,000 tons per year. That’s the annual equivalent of removing 9,300 automobiles from the roads. More broadly, this initiative will join the numerous efforts The Walt Disney Company has launched to deliver its 2020 goal of reducing net greenhouse gas emissions by 50% compared to 2012.

The facility will be located near Disney’s Animal Kingdom, with construction beginning in the coming months. Just last week, Origis Energy delivered the first of many solar panels to come as part of the project (pictured above while posed in front of the Tree of Life). 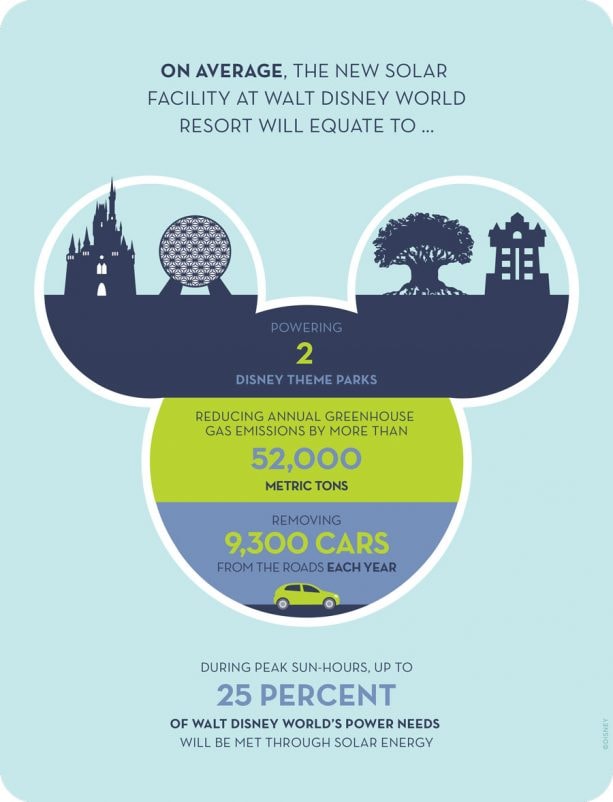 As you may remember, we recently unveiled a five-megawatt solar facility near Epcot that was developed in conjunction with the Reedy Creek Improvement District and Duke Energy. During the sun’s peak hours when it is shining brightest, these two facilities together will generate enough renewable clean energy to provide up to 25 percent of the power needs at Walt Disney World Resort.

All of this builds on our company’s longtime commitment to environmental stewardship, a tradition that began with Walt Disney himself and has continued to grow with tremendous support and passion from our cast members.

And speaking of our cast members, we’re very excited that several of them will be bringing their unique skills and expertise to this next project, including representatives from Disney’s Animals, Science and Environment and Horticulture teams. Working together, they are exploring ways to make the new solar facility pollinator friendly, with rich wildflowers and vegetation, creating a safe and welcoming habitat for butterflies, bees and other insects, including endangered and at-risk species. This important work aligns perfectly with the Disney Conservation Fund’s “Reverse the Decline” initiative, which aims to reverse the decline of 10 threatened species, including butterflies.

I cannot wait to share even more information with you about this project as work continues over the course of this year. Be sure to keep reading the Disney Parks Blog and follow our Disney’s Animals, Science and Environment Facebook page for additional updates!