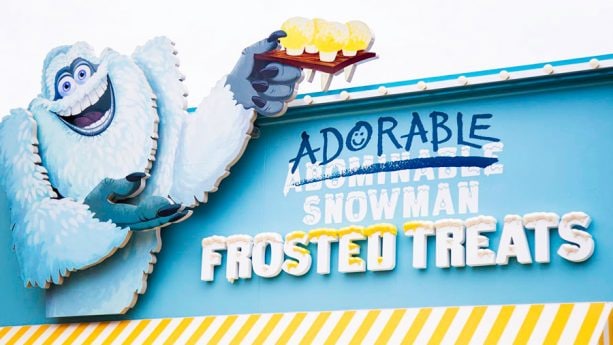 Inspired by the lovable and not-at-all-abominable monster from the Disney•Pixar film “Monsters, Inc.,” this will be your go-to spot for yummy frozen treats! Here you’ll enjoy cones and cups with tasty towering soft serve, available in chocolate, vanilla, and non-dairy lemon. The Adorable Snowman Frosted Treats will also be scooping up a few specialty treats like the Pixar Pier Parfait, a non-dairy lemon soft serve and blue raspberry frozen beverage and the It’s Snow-Capped Lemon, also a non-dairy lemon soft serve with a “snow-cap” of white chocolate – YUM! A selection of fountain sodas will be served as well, with the option to turn any soda into a float with your choice of soft serve.

Pixar Pier is set to officially open in June at Disney California Adventure park. This expansive reimagining will transform the shores of Paradise Bay with your favorite Pixar stories. Other exciting food and beverage locations coming to Pixar Pier include the new Lamplight Lounge, Poultry Palace, Señor Buzz Churros, and Angry Dogs. Stay tuned for more updates and be sure to come on out and try a frozen tasty treat at Adorable Snowman Frosted Treats!