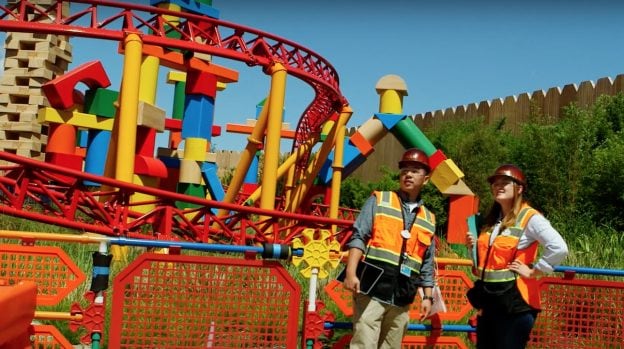 All in the Details: Imagineers Put the Finishing Touches on Toy Story Land

Can you believe Toy Story Land is now less than two weeks away from its grand opening on June 30 at Disney’s Hollywood Studios?

Our friends in Walt Disney Imagineering just shared a new video with us from the Toy Story Land site, where Imagineers of all disciplines are putting the final touches on this thrilling new land. In the video above, Imagineers Ryan Wineinger, Shannon Mashchak and Alexis Cummins share just how many disciplines within Walt Disney Imagineering – such as Show, Project Management and Graphics – have joined forces to bring this project to life.

They also give us a look at one of the smaller, but essential details they’ve added to the land – graphics, such as those that appear on toy boxes and game boards that add authenticity to the land’s selection of toys.

“The graphics tell a story because they really help ground where you are,” said Graphic Designer Alexis Cummins. “Any visual is really going to do that for guests, especially at Toy Story Land. We’re using all of the things Andy would actually have at his disposal to make our signs and graphics.”

A favorite graphic of the Imagineers? The box for Wheezy that guests will pass in the Slinky Dog Dash queue.

“My favorite thing about it is it really does give you more information about where Wheezy came from, how long Andy’s had him and it’s just a great graphic,” Alexis said.

Keep your eye on the Disney Parks Blog for more coverage of Toy Story Land’s dedication and grand opening.

Likes (1)
Share All in the Details: Imagineers Put the Finishing Touches on Toy Story Land