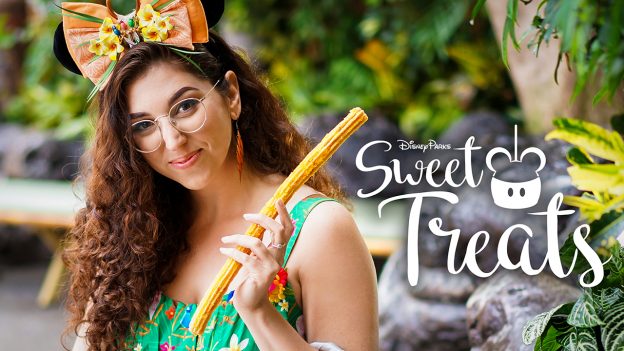 This month’s Sweet Treats is bringing you pastries, cupcakes, churros, and more! But first, did you know that today is the OFFICIAL National Doughnut Day? That’s right, every year on the first Friday of June, you have permission to celebrate by eating ALL THE DOUGHNUTS! And of course, Disney Parks doughnuts are the best way to celebrate. 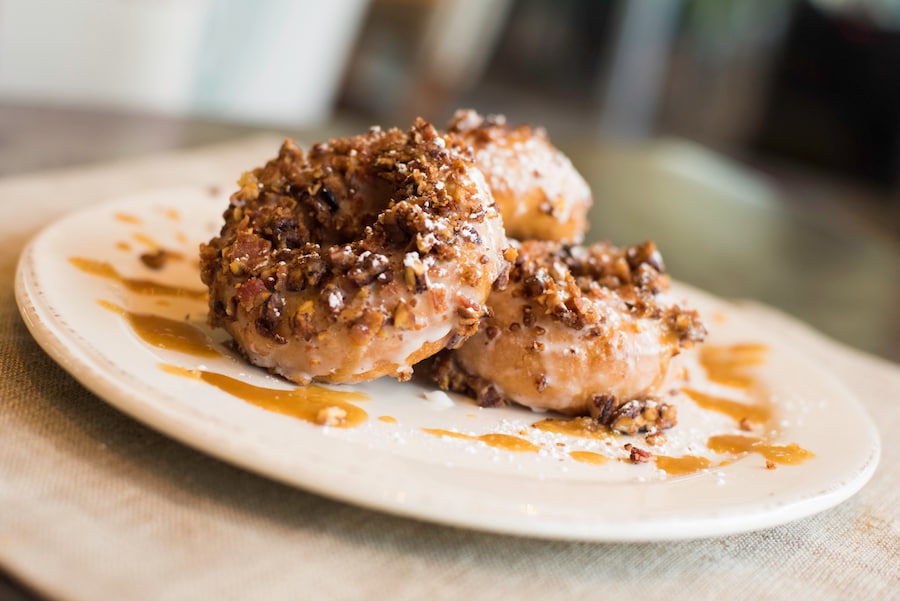 At Walt Disney World Resort, my new favorite doughnut is DEFINITELY the one that’s coming as part of a new southern-style brunch at Chef Art Smith’s Homecomin’ at Disney Springs starting June 24 (more tasty details to come next week…stay tuned!). On the menu for this brunch is a plate of house-made Bacon & Pecan Doughnuts – iced and piled high with pecans and bacon then drizzled with house-made caramel. Over at Magic Kingdom Park, you’ll find a delicious Doughnut Sundae at Plaza Ice Cream Parlor. This sundae consists of a glazed doughnut with a scoop of handmade ice cream topped with whipped cream, chocolate and peanut butter chips, milk chocolate Mickey Ears, and a cherry – yum! There’s also Croissant Doughnuts at Refreshment Port at Epcot and a warm glazed doughnut with cinnamon apples, vanilla bean ice cream and caramel sauce found at Sci-Fi Dine-In Theater Restaurant at Disney’s Hollywood Studios. 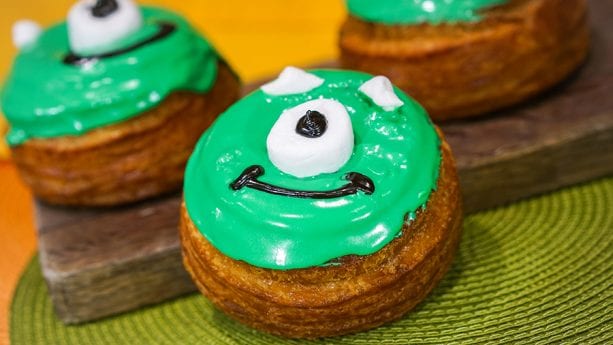 On the west coast, Disneyland Resort offers special rotational donuts at The Coffee House at the Disneyland Hotel and the Main Street Coffee Cart in Disneyland park. These donuts are made fresh every day and the flavors change on a weekly basis, so you never know what you might find! Currently, you’ll find yummy options like the Salted Caramel Maple Bacon Donut at the Main Street Coffee Cart or the Campfire S’more Donut at The Coffee House. If you want to see what’s available and taste for yourself, be sure to get there early as these delicious donuts are made in limited quantities each day! Other donuts at Disneyland Resort include the famous Mickey Beignets at the Mint Julep Bar in Disneyland Park. These French-style donuts are covered in powdered sugar and made fresh throughout the day. There’s also the Mike Wazowski-shaped flaky donut at Schmoozies! in Disney California Adventure park for Pixar Fest – it’s so tasty, it’s scary! 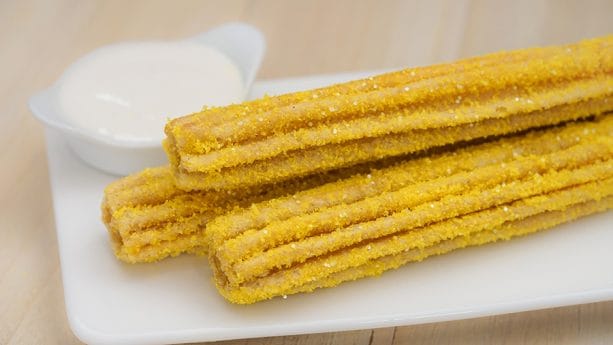 But that’s enough about doughnuts, let’s move right along to the rest of the sweets I have in store for you this month! While we’re talking about Disneyland Resort, there’s a few new churros that you HAVE to know about – the first is a Pineapple Churro served with marshmallow dipping sauce. This churro comes coated in pineapple-flavored sugar and can be found at the Churro Cart in front of Sleeping Beauty Castle in Disneyland Park. The next churro will only be available June 8-10 – it’s a Gold Churro at the New Orleans Square Churro Cart inspired by Pirates of the Caribbean. Also, during this time period, the popular Presto Rabbit Churro from Pixar Fest will be available at the Churro Cart in Critter Country.

Back on the east coast at Walt Disney World Resort, BoardWalk Bakery at Disney’s BoardWalk has introduced a couple new sweet items. Here you can start your morning off with either an Almond Croissant with almond cream, sweet syrup, and toasted almonds or a warm BoardWalk Bakery Cinnamon Bun with buttery cream cheese icing. 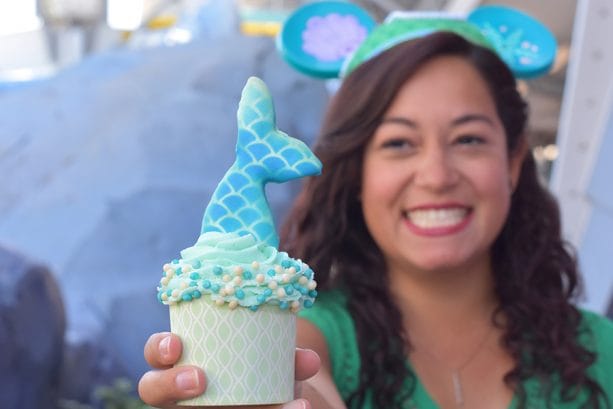 Look at this CUPCAKE! Isn’t it sweet? That’s right, starting June 5 you’ll find this Mermaid Cupcake in Magic Kingdom Park at the Main Street Bakery. This vanilla cupcake is full of sprinkles of color and topped with sea foam green buttercream, chocolate crispy pearls, sprinkles, and an iridescent mermaid tail cookie. But of course, that’s not the only new sweet in the park – there’s also the ‘of the month’ sweets for June! Rounding out the list of this month’s Sweet Treats, at Plaza Ice Cream Parlor, you’ll love Ice Cream of the Month, Rocky Road! And at The Plaza Restaurant, you’ll find a PB&J Milkshake of the Month with vanilla ice cream, melted peanut butter, and grape jelly and topped with whipped cream and a cherry.