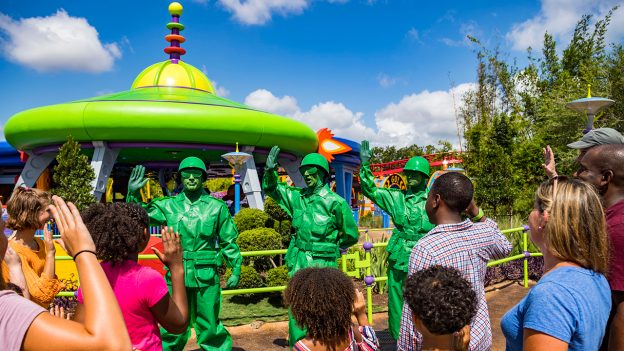 It’s almost time to Play Big, with the opening of Toy Story Land at Disney’s Hollywood Studios just a few days away! When you visit this fully-immersive new world, you’ll suddenly find yourself the size of a toy, wandering through Andy’s backyard and engaging with some of his favorite toys. Buzz, Woody and Jessie are there, along with a Green Army of toy soldiers to get everybody involved in the fun!

The Green Army Drum Corps marches through the backyard several times a day, playing lively percussion sets filled with awe-inspiring drum sequences. You’ll definitely want to be on the lookout for their high-energy, one-of-a-kind performance, and you may even find yourself drumming with the corps!

Elsewhere, Sarge and his Green Army Patrol are looking for recruits to enlist in a fun and interactive boot camp for all ages. You could get caught up in a game of “Sarge Says,” playing with giant Pixar balls, oversized crayons and other fun props to see if you have what it takes to become an official Green Army cadet.