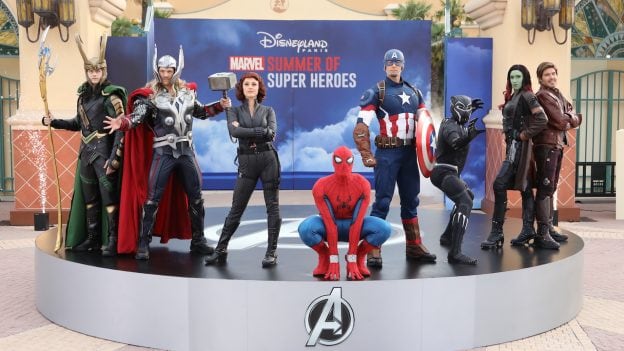 It’s a Marvel fan’s dream: Iron Man, Thor, Scarlet Witch, Captain America, Black Widow, Spider-Man, Black Panther, Doctor Strange and more all in one place for Marvel Summer of Super Heroes at Disneyland Paris. So get ready because epic shows and heroic encounters are in store for fans of all ages this summer at Walt Disney Studios Park.

Guests can have a dance-off with the Guardians of the Galaxy, watch the ruthless Loki try to seize Tony Stark’s Arc Reactor, share a heroic handshake with Captain America and be awed by a brand new, live-action stage show as the Avengers try to escape the clutches of Thanos – all in the same day!

For that super hero-sized appetite, special dining options are now available at the park. Keep an eye out for Spider-web burgers and Mini Groot-shaped biscuits, not to mention a mug featuring Thanos’ famed Infinity Gauntlet. Fans who want to take a piece of the action home can also purchase exclusive new merchandise on sale at the resort.

It’s shaping up to be a heroic summer at Disneyland Paris during the 25th Anniversary celebration! Join in on the fun during Marvel Summer of Super Heroes, now until September 30.