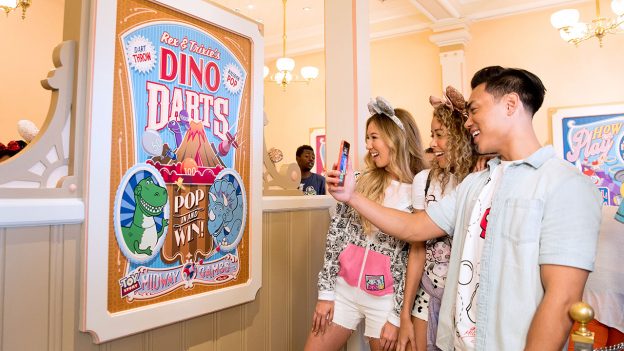 We’re so excited to share this news with you! The all-new Play Disney Parks mobile app will make its official debut at Disneyland Resort and Walt Disney World Resort on June 30. The app will be free to download, and guests can pre-order today on the App Store and Google Play to be among the first to have the app automatically downloaded on their device.

As we previously shared, the #PlayDisneyParks app was designed for families and guests to enjoy together. With group play that enables everyone to join in on the fun, guests will turn wait time into play time with all-new interactive experiences and activities created for select attraction queues, including: “Playset Party” at Toy Story Mania! in Disney California Adventure park and Disney’s Hollywood Studios, “Off to Neverland” at Peter Pan’s Flight at Disneyland park and Magic Kingdom, “Rocket Race” at Space Mountain at Disneyland park and Magic Kingdom, and “Andy’s Boardgame Blast!” at the new Slinky Dog Dash coaster at Disney’s Hollywood Studios. And there’s even more to explore in the app!

Guests signed into their Disney account (available to guests 13 and over) can also earn, collect and share uniquely themed achievements, rewarded for playing games, answering trivia, completing challenges and experiencing select attractions across Disneyland Resort and Walt Disney World Resort. And with the Disney trivia feature, there’s sure to be something for everyone to enjoy as guests can discover fun facts about their favorite theme parks.

This first-of-its-kind Disney app will also allow guests to celebrate the songs of Disney in a whole new way. Access Apple Music®* from within the app to tap into a curated audio experience featuring official playlists inspired by beloved theme park lands, attractions and characters – and some favorite memories too. Apple Music subscribers will even be able to add favorite Disney tracks direct to their Apple Music library allowing them to live and re-live the magic of Disney parks music at home.

And this is just the beginning. The Play Disney Parks app will evolve over time with new experiences and offerings, including the eagerly anticipated Star Wars: Galaxy’s Edge, coming to Disneyland Resort in summer 2019 and Walt Disney World Resort in late fall 2019.

For the latest information and updates, follow the dedicated Play Disney Parks pages – Disneyland Resort and Walt Disney World Resort – and be sure to pre-order the app.