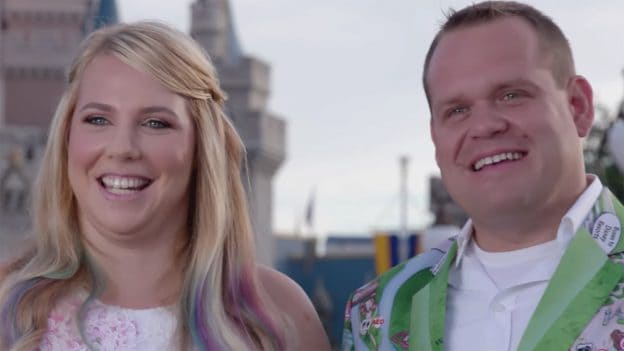 But let’s back up at bit. Ben and Kylie met a few years ago while working at a local theme park. The couple had their first date at another theme park. And then…

“Our second date, we visited [Disney’s] Hollywood Studios and decided to buy the wedding ears as a laugh,” Ben said. “Little did we know that we’d be using those same hats at our Epcot bachelor/bachelorette party!”

Ben, who regularly attends the International Association of Amusement Parks and Attractions (IAAPA) convention in Orlando, often creates special themed jackets to wear to the convention to really get into an adventurous spirit. Since theme parks have been – and continue to be – such a big part of their lives, Ben decided to create a very special jacket themed after Disney Park guide maps to wear for their 2018 wedding.

But creating one inspired by our park maps was no small task – it required three months of searching for the proper material, and then sewing and tailoring before it was finished.

When Kylie heard about Ben’s plan, she decided to get into the park spirit, too, designing her bridal bouquet out of park maps – and even hiding a few Hidden Mickeys in there.

“The bouquet just seemed so perfect. It will last a lifetime [and] represents our greatest hobby,” Ben said. “We headed to Disneyland as part of the honeymoon so there were even Disneyland maps in there!”

Today the couple says they still get compliments on their wedding attire – especially when Ben wears his jacket out to the park for a day. But they don’t mind.

“Life is short, so why not have a little bit of fun and stand out from the crowd!” Ben said.

Check out the video above for more on the Story family.