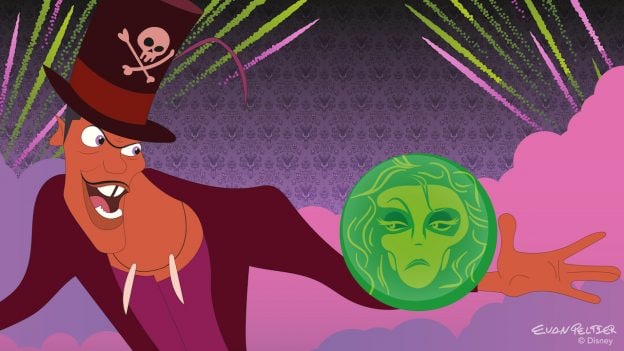 Disney Doodle: Dr. Facilier Visits ‘Friends on the Other Side’ at Haunted Mansion

In this weekend edition of Disney Doodles, artist Evan Peltier imagines what Dr. Facilier from “The Princes and the Frog” would do if he had the chance to visit Magic Kingdom Park.

In the film “The Princes and the Frog,” Dr. Facilier, who dabbles in Voodoo, sets out to rule New Orleans by tricking Lawrence into a deal that benefits him more than Lawrence. To seal their deal, Dr. Facilier sings “Friends on the Other Side” – so it’s only natural (or would that supernatural?) that he’d seek out the spookiest place at Magic Kingdom Park – the Haunted Mansion.

Here, Evan depicts Dr. Facilier checking with new “friends on the other side” inside Madame Leota’s Seance Room.

Likes (2)
Share Disney Doodle: Dr. Facilier Visits ‘Friends on the Other Side’ at Haunted Mansion