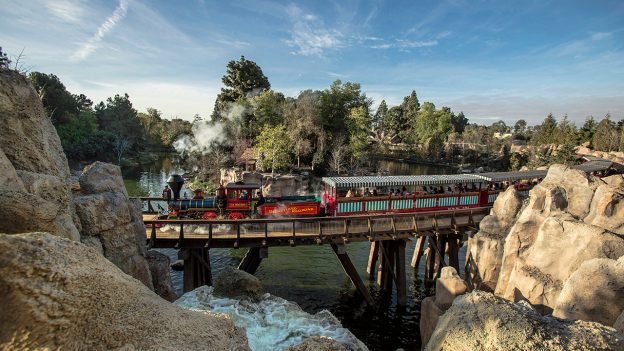 All aboard, Disney Parks Blog readers! In honor of Disneyland celebrating 63 years earlier this month, we will be departing on a grand circle tour to explore the Disneyland Railroad. As an opening day attraction and one of Walt Disney’s personal favorites, this iconic experience is full of rich historical details and beautiful sights. Let’s take a closer look! 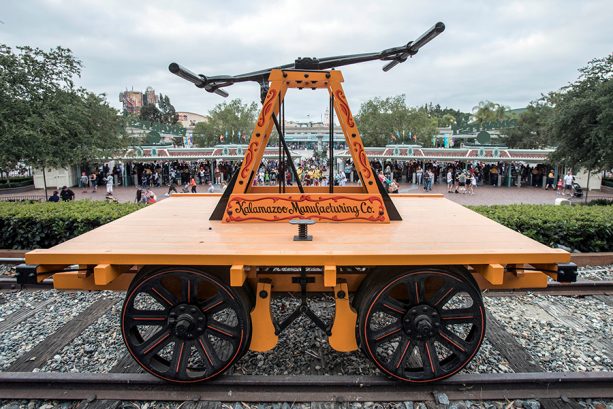 As guests first enter Disneyland park for the day, their first sight is the elegant, Victorian-style Main Street Station. The station is framed with a centered sign including both the elevation of 138 feet above sea level and the population of Disneyland, which is updated periodically to reflect the number of guests who have visited the park since it opened in 1955. Also, in front of the station is the Kalamazoo handcar, which sits on the former passing track. A fixture in the park since 1958, the handcar was a unique addition to Walt’s collection!

Stepping into Main Street Station, guests are treated to period details, railroad memorabilia and photos demonstrating Walt’s love of railroads. In the center of the depot, you can view a reproduction of Walt’s original Carolwood Pacific locomotive, the Lilly Belle. The original 1/8-scale “live steamer” was named for his wife, Lillian Disney, and was the main engine for the half-mile track around his family’s home in Holmby Hills. 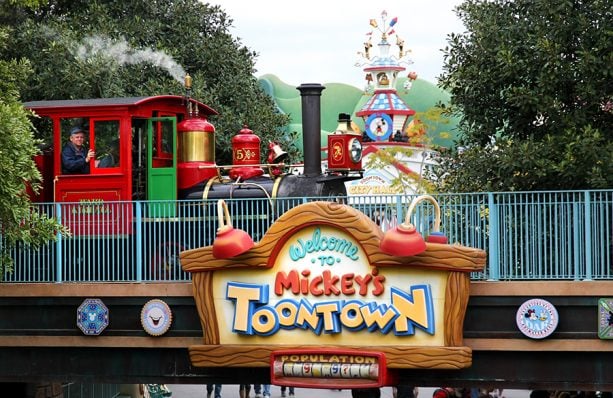 When boarding your train, be sure to keep an eye out for which engine will be taking you on your journey. Each of the five steam engines on this historic line has its own personality and story—some which date back to 1895! My personal favorite is Engine No. 5 – the Ward Kimball. This train is unique in that it was named not only for a railroad icon, but also for an icon of The Walt Disney Company. Disney Legend Ward Kimball was an animator, one of Walt Disney’s “Nine Old Men,” and a railroad enthusiast, whose passion for the hobby helped inspire Walt’s own love of trains and railroading. If you look hard, you may see the silhouette of a familiar cricket painted somewhere near the front of the engine, displayed in homage to one of his most beloved characters! 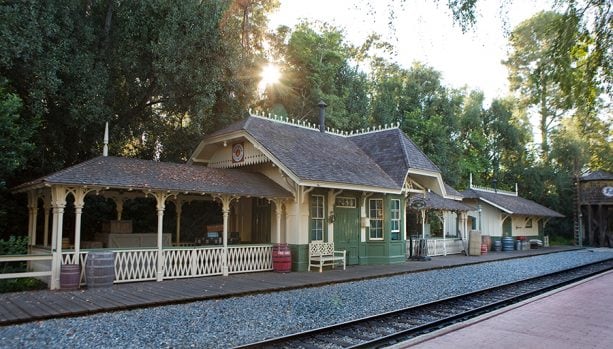 After leaving Main Street Station, the first stop on the Disneyland Railroad is New Orleans Square/Frontierland Station. The station features a number of buildings, including a functional water tower and a loading platform. Across the tracks from the loading station is the original Frontierland depot that existed before New Orleans Square was built. The inspiration for the original Frontierland station was the wooden depot featured in the 1949 Disney live action film, “So Dear To My Heart.” Walt Disney initially wanted to re-use the actual set piece that had been built for the film, but when he learned that his friend and fellow animator Ward Kimball had already modified it into a fully functioning building for his personal Grizzly Flats Railroad—thus making it difficult to move—Walt asked his designers to build a new one just like it. 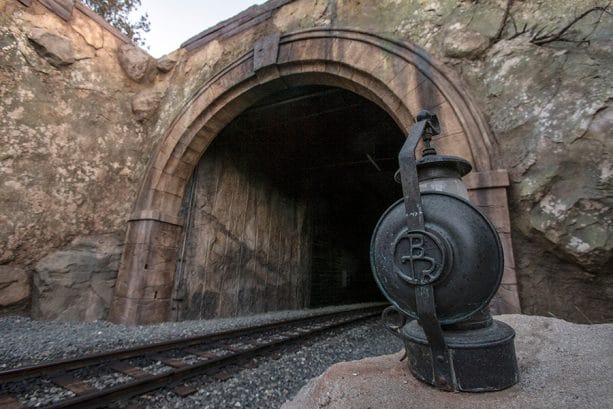 Continuing along the Rivers of America, guests can take in the landscapes inspired by four of America’s majestic rivers—the Mississippi, the Columbia, the Missouri and the Rio Grande. The trains travel across the rocks on a trestle that extends out over the water, passing waterfalls, wildlife and some familiar sights of the old west. If you keep an eye out, you may even be able to see some familiar logos from a ranch that once was located around these parts. 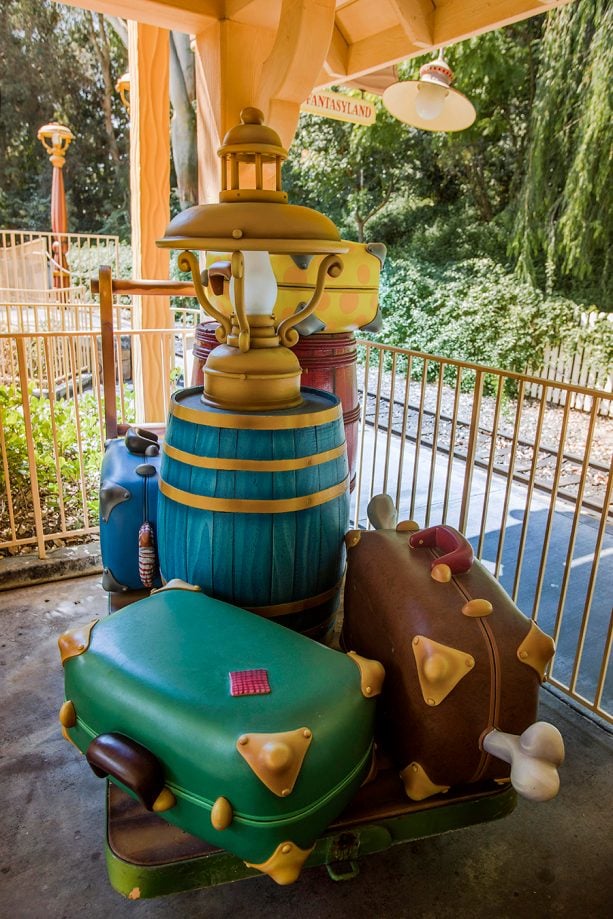 If you’ve ever thought Mickey’s Toontown Train Depot looks familiar, there’s a reason! The station is a cartoon version inspired by the original Frontierland Station. It has the same basic design with a similar roof style and a small fenced-in section for luggage and other freight. The luggage area is especially fun and colorful with humorous suitcases and crates, including one suitcase with a sock hanging out of the top and another with dog bones popping out of the sides. 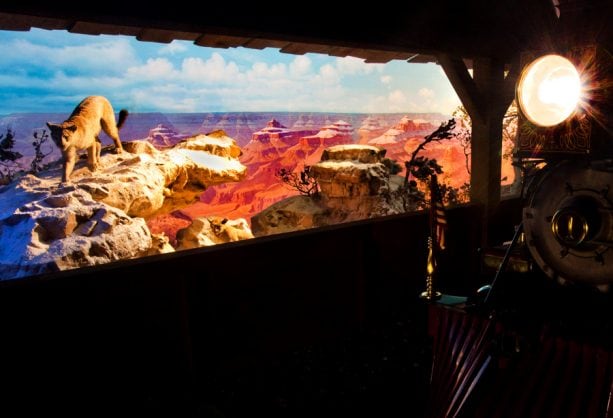 Before returning to Main Street Station, the Disneyland Railroad makes one more stop in Tomorrowland to drop off guests in the future before heading back into the past! As you pass through the 306-foot-long Grand Canyon Diorama, be sure to keep an eye out for landscaping, ancient ruins and various examples of indigenous wildlife. As the trains move past the Grand Canyon Diorama, they make their way to another diorama, this one taking guests to the mysterious Primeval World. The Primeval World Diorama and Audio-Animatronics dinosaurs were originally designed and built by Disney for the 1964-1965 New York World’s Fair and were added in 1966 to enhance the Disneyland Railroad experience.

Hope you enjoyed riding the rails with us today! To take a look closer at other Disneyland Resort experiences, check out these stories: